An Incredible Journey - Chartering a Plane on the Garden Route

Today began with a walk to the breathtaking cliffs in our neighborhood, which plunge hundreds of feet into the pounding surf. It was Tobi's first time seeing this part of our neighborhood, and he was pretty impressed.

Then we began to get ready for the "surprise". The weather wasn't quite good enough to do the surprise yesterday, so it got pushed to today. I thought it might be something like snorkeling or deep-sea fishing... so I asked Tobi if I should wear my swimsuit. "You can if you want." was his anser. Hmmmm. Then he put on a pair of jeans, at which point suspected that we might be going horseback riding. I put on a pair of jeans as well. But when we dropped Lukas off with our neighbor (and friends), and picked up their 10-year old son, Tobi said that he would really enjoy the surprise as well... throwing me for a complete loop. After a 30 minute drive, we pulled into the George airport, and Tobi made a call. 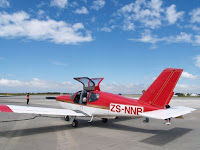 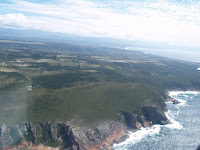 Suddenly, it occurred to me... we were going on a flight! For my birthday / anniversary present, Tobi had arranged a charter flight over the beautiful Garden Route. (But the surprise would have been on me, had I shown up to fly in a bathing suit!) 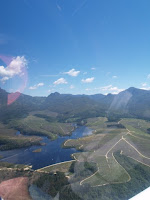 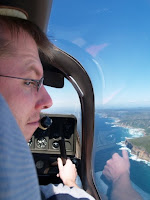 I have no words to describe how amazing it was. The weather was so perfectly clear that we were able to see the mountains, and dolphins and seals in the sea. The pilot let Tobi take the controls a bit as well, which he really enjoyed. We were up there for a little over an hour, but time just flew by! I'll try to get some photos online as quickly as possible.

After our flight, we headed off to "Pine Creek" for a Kindermusic end-of-year function. we got there a bit late for the performance of Lukas' little group, but we were happy to have the chance to meet up with some of the other parents again, and spend some time outdoors on such a pretty day. From there, our friends Deoni and Ulli invited us to their place (in an area called Kleinbraak) for a brai. Not only do they have a truly spectacular home, and a characteristic South African indoor brai, but they're also lots of fun... so Tobi and I happily accepted the invitation, and spent a few hours at their house this afternoon! Lukas had fun playing with their two little girls, and the little girls just couldn't get enough of silly Uncle Tobi (and it was really cute to watch them play).

And then we came home, exhausted, but happy. Tobi and Lukas are already in bed, and I got up just long enough to write this entry... before I forget!

[As I write this the wind is blowing so hard... like it does in Florida during tropical storms - but here it blows like that often... just because.]