A Weekend in Cape Town 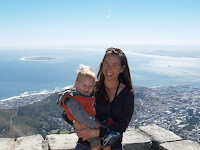 A week ago yesterday, we left for Cape Town. The plan was to leave early, to make it to the morning markets, but life with children never goes exactly as planned. It’s a 4 hour drive, and the National Highway (N2) from Mossel Bay to Cape Town lies at the foot of several mountain ranges, make it quite a scenic trip. Or hotel reservations were at the downtown Best Western, which was reportedly a nice place to stay, complete with kitchenettes in the rooms and two pools on the property. Had it not been for a mosquito-infested room and my son getting multiple bites on the face, one of which swelled up to the size of a foos-ball (on his eye-lid, of course, making him resemble Quasi-moto), we might not have checked out after the second night. Fortunately for us, the Victoria & Alfred Hotel on the Waterfront had availability, but this meant that we would have to check our dog into a nearby kennel for the remainder of our time in Cape Town. Just one look at my son’s face was all I needed to be convinced that this was the right decision, and within a few hours we were all settled into our new room on Cape Town’s glorious Waterfront.

One of the highlights of our time in Cape Town was definitely shopping. It’s much easier to find cute kids clothes in South Africa’s larger cities, so we spent some time at the Canal Walk and Waterfront shopping malls. We also tried to visit the shopping area known as Cavendish Square, in the portion of Cape Town known as Claremont, but it appeared fairly unattractive from the street, and so we settled for a little hike on a path called the Liesbeck Trail.

The Liesbeck Trail is surprisingly beautiful, and I certainly didn’t expect to come across such a nice little nature trail in the midst of one of South Africa’s largest cities. At that point, we still had the dog with us, and since he’s a water dog, and the trail runs along a small river, he really enjoyed his little afternoon frolic.

We also made it up to the Rhodes Memorial, a memorial dedicated to Cecil John Rhodes, a British explorer, powerful mining magnate, Prime Minister of the Cape Colony (and proponent of Colonial Expansionism). The memorial, which was completed in 1912 (a decade after Rhodes’ death), is as impressive as an ancient Greek temple, complete with huge columns and massive lion figures sculpted from local granite.

Food in Cape Town is also unrivalled, and we visited some of Cape Town’s best restaurants throughout our trip. Even South Africa’s finest dining establishments are surprisingly affordable on a Western budget, something we’re really going to miss back in Europe! From Marco’s African Café (with live entertainment and super friendly service) and Cape Town Fish Market (with a Japanese-style tepanyaki area and sushi counter) to Morton’s on the Wharf and Krugman’s Grill (both of whom hae fantastic steak!), we had some wonderful food during our trip. Beyond compare, however, was Baia Seafood Restaurant at the V&A Waterfront. This was the freshest, tastiest, fish we have without a doubt ever had, and the service couldn’t have been better. The setting is also unbeatable. You can ether have an outdoor table looking out over the harbor, or a cozy indoor spot on your own sofa – so romantic! It can be impossible to get a table here on the weekends, but we called ahead and lucked out.

And no trip to Cape Town is complete without visiting the seals down at the water’s edge, so I took the baby along to say hello. Some were basting in the sun, while others slyly swam along nearby boats, probably in search of food. The Two Oceans Aquarium (also at the Waterfront), is an excellent spot to see seals, penguins, and other marine animals, and we try to make a family outing of that whenever possible.

In conclusion, we had a fantastic time in Cape Town. Had I had someone along to help look after the baby (while my husband was working), I probably would have done a Township tour or a trip to a nearby museum, but some things must be left for our return to this fabulous city!
Posted by Liz Kraft at 4/22/2007 03:34:00 PM