Cape Town - with the Baby and Nanny 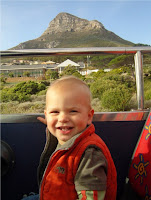 LET THE TRIP BEGIN!
Recently, I returned to Cape Town, this time with the intention of gathering as much information as possible for future travel articles. I packed the baby and the nanny into the car and drove 4 hours to 's "", which just happens to also be one of the world's "must-see" destinations (according to the BBC program "Holiday").

The plan was to leave early Monday morning, arriving in by lunch. So much for plans. We arrived shortly after 3 Pm, checking into 's "Extreme Hotel" in the downtown, or "CBD", area.

The hotel is fairly easy to find, using a street map or navigation system (we used the latter). After checking in, we tried out the hotel's restaurant, which boasts 40 milkshake and 30 hamburger varieties. The milkshakes rock, and Ferrero and Lindt are just a couple of the options. The hamburgers are tasty, but seem out of place on their large square platters, surrounded by upscale garnishes and drizzled oil. And in our experience, the service could be better... but then again, we chose to dine outside of standard mealtimes.

Adjacent to the restaurant is the pool, and diners can check out the people in the pool through the glass wall. I expected a standard size pool, that one can actually swim in, but the pool at this hotel is more to take a dip in after climbing the rock wall (which is at the side of the hotel - with off-season climbing sessions offered on weekends).

What I like about the Extreme Hotel are the affordable and tastefully decorated rooms, great service, and ideal location (just next to Long St., with many top bars and restaurants within walking distance). "Extreme" sports enthusiasts will love the flat-screen televisions throughout the lobby that broadcast skiing, wake-boarding, climbing, etc., as well as the same-day laundry service (great for backpackers!).

The following morning we checked out of the Extreme Hotel, had a quick breakfast at an adorably little café called Tangerine (also on Bree St.), then checked into the Cape Heritage Hotel. The hotel was actually on the same street, but closer to the "heart" of the city. Upon check-in, we were warmly greeted and directed to a gorgeous and ultra-comfy sitting room, where we were immediately welcomed by hotel staff, and experienced what was probably the easiest check-in ever. We didn't have to present credit cards or fill out forms. "Simply sign this paper, and we'll show you to your room."

The is also tastefully decorated, but where the Extreme Hotel is modern and sports-focused, the is sophisticated and culture-focused. I especially love the original yellow-wood floors and the old photos throughout. The is located on what has to be one of the trendiest "squares" in - a historic old square which serves as the courtyard for several chic and trendy restaurants and bars. A few of my favorites:
-SAVOY CABBAGE. (main entrance around the block): Fusion, international cuisine. A CNN "Hot-Spot". Super friendly staff!
-CAVEAU DELI & WINE BAR : Nice food & ambiance. A favorite for locals & tourists alike, all week long!
-BESOBAR (or "BesoBar"): Great tapas bar in an ultra-cool setting. Check out the "bedroom" lounge.

Also worth visiting (and right on Heritage Sqaure!):
-AFRICA CAFÉ: All-you-can eat; various dishes from across the African continent.
-PORCINI.: Informal Italian in an intimate courtyard setting (or indoors, if you prefer)

EXPLORING
After we checked in and got settled, I left the baby with the nanny (where else can I afford to do this!?!) and went out exploring. I was on Cloud 9. It was like the "old-days" - before the baby. I just strolled down one of the side streets, passing various inviting cafés and restaurants (and struggling not to go in!), bumping into a huge market (entirely by accident!) at Greenmarket Square, and stopping at the Cape Town Tourism on Burg & Castle Streets for information on the City Sightseeing Bus Tours.

After a couple hours, I returned to the hotel to pick up the baby and the nanny, and we caught the City Sightseeing bus for a tour of the city. The tour was very informative, and I saw so many parts of that I hadn't yet seen. I wish I would have taken notes, and had we begun earlier, we could have gotten off and on at a couple locations, such as the Iziko National Museum, or the sea-side hot spots of Camps Bay and Sea Point.The bus pass is good for 24-hours, and it stops at most of the city's cultural attractions.

We did find time the following morning to make it to something I had been wanting to visit for quite some time - Thandabantu, "A photographic journey through Southern Africa 1919 through 1939" is an amazing exhibit! It's only in through the end of June, and is normally housed in the in Kimberly. Thandabantu is the name given to Alfred Duggan-Cronin, one of the first people to photograph the indigenous peoples of , and means "Man who loves people". One can only imagine the trials and tribulations he must have undergone, traveling to some of the most remote areas in an time of horse-drawn carriages, and when there was even more strife between the races. His mission was to help white South Africans to understand the indigenous people and their traditions. Whether he was successful or not, well that's up to you to judge when you arrive here.

THE
Our last stop in was Canal Walk, reportedly the largest shopping mall in the Southern Hemisphere, and home to some of my very favorite chidren's clothing stores (like the Pumpkin Patch and Naartjie). After a couple hours of shopping and a quick lunch, we began our journey back to , taking an alternate route home. Since we were already a bit North of the city, we traveled North to Worcester on the N1, through the and , towards the winery town of , through Swellendam, and back onto the N2.

Oh, and in Worcester I did a big "no-no". I picked up a woman hitchhiking on the side of the road, with her 2-year-old son. I passed her initially, but I thought, "How long has she been standing there?" and "How would I feel if I had no other means of transportation and was forced to stand on the side of the street for hours with Lukas in my arms... hungry and tired?" So I turned around and stopped, keeping a wary eye out for any schemes or dangerous looking people, and asked her where she was going. She said Robertson, and so we took her along. Her son had the saddest expression on his face, that is, until he got a balloon and cookie from the "Auntie" that was driving. I'm so happy we were able to help her. As it is, she said she was standing there for over an hour.

Other than that, our trip "home" was pretty uneventful, and we arrived home around 5:30 that evening... to a very happy puppy (and husband).