Notes from a Traveler

I know I really shouldn't compare one country to another, because that's like comparing apples to oranges... but I can't help it. And aren't you the tiniest bit curious about my inner-most thoughts of the last few days? If so (or even if not), I'll share them with you. 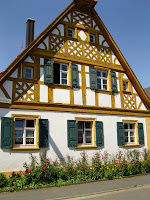 To begin with, it's nice to see white people performing physical labor. Even I fell prey to the South African tendency to hire people for any and all dirty work. But back in old Germany no one's interested in ironing my clothes for me. And that's nothing. I've seen tons of farmers harvesting their own fields, in 37 degree+ (Celsius) weather. Nope, there are no "coloreds" or "blacks" here, and the ones that are here certainly aren't interested in that sort of work. Afterall, labor is far more expensive here! Actually, it appears to be far to cheap in South Africa. What if there were less jobs, but the wages were higher? Wouldn't that, in turn, create more wealth, and more jobs? 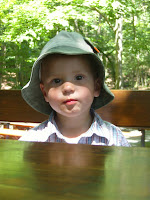 On the other hand, I miss a lot of things about South Africa. To begin with, I miss their tolerance. No one looks at you funny if you don't speak Afrikaans. They have so many languages there, that they're used to not being able to understand people occasionally. And the children are multilingual from such a young age! I thought the German kids were good... until I lived in South Africa. There, you often meet toddlers that speak Afrikaans - and English - fluently! Next (as silly as this might sound), I miss the little things, like their good-old-fashioned, store-bought toast-bread. Sure, Germany has wonderful bread, but not in their supermarkets. If you want good bread, you have to go to a bakery, and then you'll have to eat it quickly!

And then there are the standard things that I miss, just because we're in-between houses right now, and living out of a suitcase. Things like my own transportation, my own kitchen (who likes to cook in other people's kitchens?), and my daily routine (although I've never really been a routine person... it's so much easier with kids!). 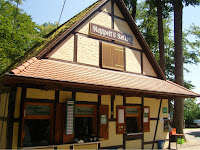 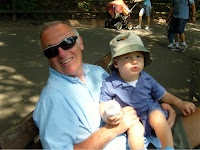 But life is definitely good. I can't complain. We've spent quite a bit of time in Biergartens & "Kellers" lately (since the weather's been fantastic), yesterday we visited the Nuremberg Zoo with Oma & Opa, and last night we visited Bamberg with a couple South African friends. What an incredibly romantic city! I can't wait to go back there with Tobi sometime in the next couple months. 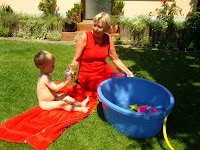 Lukas' big thing lately has been running around in his birthday suit (when it's really hot and we're playing outside). He loves it! The tough part is convincing him to put clothes back on when we have to go somewhere! He's going to kill me in a few years, when he sees the photos (and video). I plan on using it as blackmail when when he's old enough to date and drive. :-)
Posted by Liz Kraft at 7/18/2007 01:04:00 PM

am i ever happy to find your blog. we are preparing to take a family sabbatical next year and spend it on the road in Asia. i can so relate to the wanderlust and excitement you write about and it's so refreshing to see others on the road.