In a way, I am cursing myself for not finding more time to write throughout the week. And yet, we had a blast. We managed to keep ourselves rediculously busy, and the little freetime we did have, was spent with my Mom and sisters, leaving little time for blogging.

Lukas adored all of the attention... from my entire extended family (how can I compete with that?). And they were so great with him.

After our arrival on Monday, the rest of the week followed along the lines of... 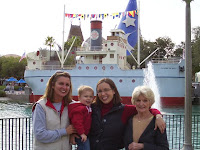 -Tuesday: We met my Uncle Paul at Disney "Hollywood Studios" (previously MGM); who joined us for "The Great Movie Ride". Along with my Mom and Grandmother (how special to be able to do 4-generation Disney day), we lunched at the "Hollywood Vine", where Lukas was able to meet some of his favorite Disney Playhouse characters (for those of you in "the know", we got to mingle with Leo and June from "The Little Einsteins" and Jo-Jo the Clown, with her pet lion, Goliath). Afterwards, we watched High School Musical look-alikes dance and cheer their way down Hollywood Avenue. 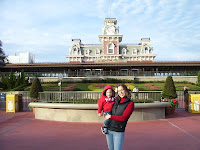 Later, we eaded over to Disney's Magic Kingdom, where we watched a special stage show at Cindarella's Castle, complete with Mickey, Minney, and friends; went on the huge, old-fashioned carousel; visited Mickey Mouse at "his house"; and went on the "Winnie the Pooh" ride.

In the evening, we left the park before the masses (missing the fireworks, but Lukas is a too small to really appreciate them, anyway), joining my Uncle and his gracious family for a yummy, home-made meal at their place, on my Aunt's special, collector's edition Mickey-Mouse-themed china. (My strong appreciation for Walt Disney, his ideals, and the fantasy-land-empire that he dreamt into reality, actually stems from my Aunt, who went from an actual "Alice in Wonderland", to a high-profile Disney Character Manager). When he finally awoke from his post-Disney slumber, Lukas couldn't get enough of Paul and Teri's kids -- and their many pets, which include a dog, snake, and gecco.

-Wednesday: After a night at my Grandmother's, we woke up bright and early (jet-lagged), walking first to Starbucks for a coffee, and then to Publix for some cookie dough. Cookie dough at 7 AM might sound strange, but our next destination was my Uncle Paul's fire station, and you never visit a fire station empty handed.

The fire station visit was a big deal. At first, Lukas was a bit apprehensive, since there's no shortage of loud noises at the station, and fire trucks are not exactly small. We climbed into the driver's seat together, and when we got out, Paul sounded the 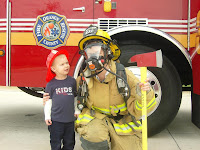 horn and siren for us, then got the hose out, getting Lukas to help put out the imaginary fire. What I didn't realize was that I (and not Paul) would be getting dressed in fire gear, complete with air ma 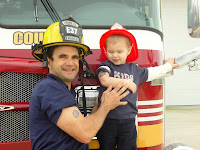 sk, tank, and axe. Afterwards, Lukas and Paul smeared on fireman tatoos for a photo (which has yet to wash off, and which Lukas flashes like a badge of honor). But the best souvenir of all was the red plastic fireman's hat, which Lukas would sleep and bathe in, if only I would let him. Needless to say, my Uncle Paul is now a favorite for Lukas, which pleases Paul, who tried (successfully) to win Lukas over with M&Ms on our last visit.

In the afternoon, we took my Grandmother shopping before meeting my Aunt Jackie and her boys at their place for coffee. Then we returned to Mom's place at the beach for some much needed R&R. 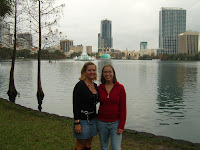 -Thursday: Was spent visiting with my friend Anne and her children, Drew and Annabelle, followed by a trip to Orlando's definitive landmark, the always beautiful Lake Eola, where we met my Aunt and cousin. 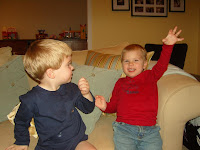 Lukas and Drew are about the same age, and have a blast together, despite the fact that they only meet a couple times a year. The same is true of Lukas and Anika, my cousin's daughter, and they chased eachother, showering one another with hugs and kisses before dashing off to play on the playground. 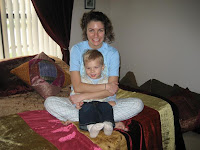 -Friday: Was our day to do nothing at the beach with my sisters. At lunch, we met up with someone that I can best describe as a step-father-figure, Al, for some fresh fish at the river-front Sunset grill. Outside, Lukas and I spotted both a dolphin and a jumping fish, but the manattee were MIA. Then we headed home to clean up, since we were expecting 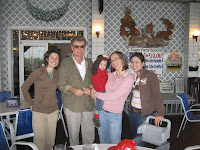 company. Mom's sister, Camille and her husband, Jeff, joined us for dinner, which ended up being more of a laugh-fest, thanks to Camille's silly stories and jokes. We laughed so hard we cried, and it was so good to see Mom and Camille together... they used to be best friends, before time and family politics got in the way. 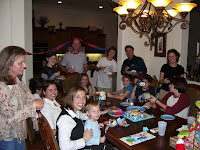 -Saturday: Mom made crepes for breakfast, then we got ready and headed out to my Aunt Jackie's house in Orlando for Lukas' birthday bash. Even though Lukas' friends Drew and Anika couldn't make it, he enjoyed his big day (albeit it a week 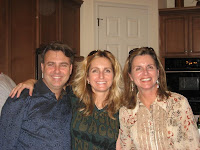 early), getting a huge kick out of the balloons, Blue's Clues cake, and presents. But the absolute high-point was probably the Blue's Clues treasure hunt, which the "big kids" teamed up to put together. There are a couple of cute 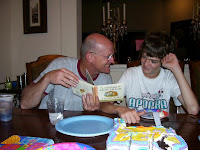 video clips from the party: Surprising Blue and The Birthday Song. In the first clip, you can see how my Aunt Beth (and later, her husband, Jim) made a big impression on Lukas, with their silliness and playful nature. 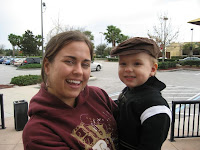 -Sunday: What did we do? Oh yeah, we had an incredibly lazy morning in Cocoa Beach, followed by some shopping and lunch in O-town (at Waterford Lakes, one of my favorite shopping spots). For dinner, Mom made tacos.

-Monday: Has the week already passed? Packing, packing, and more packing, followed by a brief family walk to the beach, where we sat for a few minutes before returning to load up the car.

On the way to the airport, the sun was setting, just as it had done upon our arrival one week earlier. Suddenly, I found myself strangely envious of the trees to our right. How amazing it must be to never watch a Florida sunset, uncertain of when you'll see the next. How incredible it must be to have roots.

The Goodbyes were quick and (relatively) painless. We had a quick pizza dinner at the airport, before Lukas and I had to dash off to our gate. Big hugs for everyone, but rushing off left no time for either photos or tears. And that's how I like it. Only smiles, as our meaningful week in Central Florida fades to wonderful memories.
Posted by Liz Kraft at 1/22/2008 06:33:00 PM

What a great re-cap of the week and of your impressions of the events during that time. We miss you and Lukas already. We had a blast with you both! Paradise can be found wherever you live and you are so adept at finding this.

How funny! I thought that was a photo of Paul in fireman garb. Lukas seemed intrigued with seeing you as a fire woman. He was really proud of that tatoo and couldn't get enough of that fireman hat. It's clear how much the time with Paul, at the station, made a lasting impression on him.