The Paris Experience - For Families 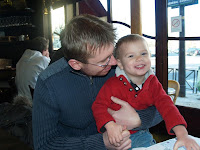 Paris. The City of Romance.

Can it double as a family friendly destination? Perhaps.
But fate would have it differently for us.

Paris is not one of those cities where you can show up, eat anywhere, stay anywhere, and have a great time. Our time in South Africa spoiled us. It seemed there, no matter where you went, you'd have a great meal and decent service (especially in cosmopolitan Cape Town). Not so in Paris.

On our way, we ran into traffic. Everyone seemed to be going to Paris for the weekend. So it took us an hour longer than expected just to get there. Then we had to drive in the city. Forget traffic laws or pedestrian right-of-way. It seemed more like a free-for-all. Masses of cars entering already full intersections - causing cross-traffic to come to a stand-still, mo-peds coming no more than a foot from slamming into the side of our car - in crazy 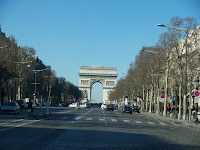 Parisian round-abouts (the appalling Arc de Triumph Round-About, to be exact), people driving in between lanes and in lanes designated for buses - completely oblivious of street markings, honking just because... it was a driver's worst nightmare.

And then we got to what we thought was our hotel. The sign said Mercure, it was near the Eiffel Tower, and it was the place we had stayed at a 6 years ago. But sadly, the woman at the front desk informed us in a sad tone of voice, our reservation was just down the street, at a different Mercure. Tobi tried to stay upbeat, but for me - tired, hungry, hormonoly charged and severely disappointed - it was time for an emotional break-down. How could this place, just next to the railroad track, with no view of the Eiffel Tower, and a much dodgier property (we've stayed in some American motels that were nicer), charge €125 a night, as their rock-bottom "Internet only" special? And this doesn't even include the €20/day parking fee, and an additional €20 if you opt for breakfast.

So we had payed €150 to stay in a hotel that we didn't want... it was time to pull myself together, so we could go to dinner. My friend Jennifer had recommended the Latin Quarter.
If only:
-It weren't already 9 PM
-The people at the subway information desk spoke English
-The subway authorities had been kind enough to make it obvious (with signage) where handicapped people, and those with small children (and carriages), should enter
-The Latin Quarter weren't 8 subway stops away, which translated into a half-hour's ride.
-The people at the restaurant we chose din't hate us before we even opened our English-speaking mouths.

Then, maybe then, it would have been a memorable experience. Well, I suppose it was memorable either way.

Don't get me wrong, neither the food nor the service was bad... but there are probably better restaurants out there, which we might have found had we planned ahead.

But Tobi makes fun of me when I do that sort of thing, and, to be fair, we have had our share of disappointing experiences, even with the trusty guidebook at our side. So I decided to be spontaneous and easy-going this trip. (But I trust he'll be more appreciative of my nerdy trip-planning in the future).

Breakfast was even more disappointing. Not wanting to eat at the overpriced hotel, or one of the graffiti-walled cafés on either side, 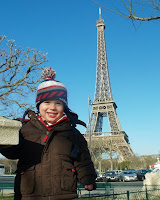 we headed towards the Eiffel Tower, deciding to find some breakfast there. A few blocks past the Tower, we found a place that smelled of fresh baguettes (from outside), and the awning said "Patisserie" and "Creperie". Excited, we walked in, only to find a bar-like atmosphere. Breakfast options were Spaghetti Bolognese and a variety of other dinner dishes, cold crepes, or omlettes. Since my stomach doesn't seem to handle eggs well this pregnancy, I went with the crepes and fresh-squeezed orange juice, which contained either lemon juice or cleaning concentrate, and cost €6 per glass (and we of course ordered two). My dreams of eating at a quaint little café where Europe's great minds had once eaten, drifted away with each bite of my cold crepe.

Fortunately, this is where our trip began to get fun. We went to the massive green park in front of The Eiffel Tower, where Tobi froze, and Lukas ran and played, chasing seagulls and darting through playgrounds. Running after him, suddenly I realized that no matter how disappointing our choices of hotel and restaurants might have been, this trip was actually far more memorable than the last - for Lukas had taught us how to enjoy Paris through the eyes of a child - laughing, running, and playing as if nobody's watching.

After the park, we picked up the car from the hotel and drove to the Champs Elysées, where we strolled down the Avenue, stopping for a take-away decaf latte (don't ast where - it's shameful), popping into shops, and grabbing a french-style stand-up lunch from one of the many bakeries. That's right, we had had enough with the disappointing sit-down places. It was time we took our destiny (or at least our gastronomy) into our own hands.

One of my favorite stops was our visit to the Mariott... where we found toilettes in the lobby, and for a brief moment, we saw our future. Someday, we said, we'll be able to afford a place like this, and how nice it will be!

I always thought that the only places you needed a really nice hotel were in India or Thailand, afterall, everyone needs respite from the noise and smog. But I think this is perhaps true of every big city, anywhere in the world. Having a luxurious hotel to retire to makes every tiny "mishap" a non-event... and then you have the incredible concierge, who are there to make sure you have your every need attended to (oh how we loved our concierge at the Hilton Brisbane, where we lived for 6 weeks). Someday...

The drive back to Holland, in the day-light and without traffic, was lovely. Minus, of course, the small incident at the rest stop, where some horrible French man kicking his German sheppard in the head, seemed quite shocked when a bold American woman started screaming at him in his own country, in her foreign tongue. "Are you crazy?" I asked - repeating the question then in German, to be sure he understood (surely he spoke one of the two languages). His daughter replied in a deep french accent, "You are stupEED, You are a moRRRon!" (as if to say, "This is how we do things here you stupid foreigner."), to which I responded, "That's animal abuse! I should report you to the authorities!" (Yeah right, which authorities would that be? I asked myself as I said it). Then I got in the car and we drove off, steam coming out of my ears. How dare he!

Back on a high note, in the evening, we had an extra special surprise awaiting us back in sleepy Oudelande. But for fear of this entry becoming far too long and indegestible, I'll post that seperately.

But regarding Paris, someday, I'll find the formula for a family-friendly (and still affordable) visit. My guess is that it probably has something to do with staying either in an apartment, or in the most affordable accomodation near the central Champs Elysées, doing your best to avoid the metro, and traveling mid-week, outside of rush-hour periods. I plan to put this theory to the test sometime soon, and will certainly let you know my findings! Wish me luck!
Posted by Liz Kraft at 2/17/2008 08:57:00 PM