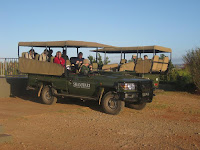 It's long been a dream of mine to go on a “Big 5” safari, or game drive. The risk involved has always seemed negligible -- at least up until last Thursday, when our Xhosa ranger and guide began explaining the importance of the giant elephant-hunting rifle at his side. 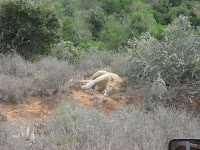 Then, hours later, as we sat face-to-face with a pride of lions, the vehicle that once seemed sufficiently high, was shockingly low. Should the lion decide he was hungry, and that my son looked like an easy catch, who would be faster, the lion, or our guide? 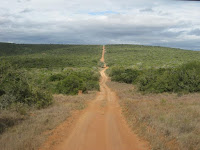 I still managed to enjoy myself, but now and again I realized how extremely vulnerable we were. Another prime example is the time we spent parked next to a herd of elephants in our large-vehicle-turned-small, at the foot of these - mostly gentle – giants.

...Or beside the cheetah, one of the world's fastest cats...
...Or sitting next to the rhinos for that matter.

And as far off as hippos that we spotted might have been, one couldn't help but wonder as we did our bold water crossings. Hippos are, after all, considered one of Africa's most dangerous animals.

Injury-free, and several game drives later, our time at Shamwari Game Reserve came to a happy ending. We probably managed to

see only seen half of the 49,000 acres, but the countless animals that we spotted, along with the sunsets and sunrises, and some truly incredible food, made it a monumental experience.

Really, every moment that we've spent in South Africa has enriched our lives, and this trip gave us an odd sense of home-sickness, for all that we have left behind.
Posted by Liz Kraft at 11/21/2008 12:22:00 PM