The Land of Everlasting Friendships 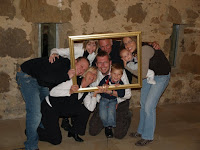 "Walter, wenn ich zaubern könnte..."
So began the poem that Moni had written for her friend Walter, a friend since childhood.

Of all the things that I wished to someday be invited to - an Indian wedding, a Zulu celebration, a formal holiday ball - a German birthday wasn't one of them. And yet, the "round" parties that I've attended have exceeded my expectations by far, leaving a huge and lasting impression.

Maybe it's the speech given by the guest of honor, in their shining, celebrity moment; or the songs sung in their name (with thoughtfully crafted lyrics, written about their life); or the incredible food and drinks. I suppose every party's different, but I'm always struck by how much time and effort people go through to plan such events. I'm used to, "Hey, it's my birthday. Wanna get together for dinner at Friday's?"

And birthday's are usually payed for by the person getting one year older, which generally includes food, drinks, and entertainment.

A couple days after Walter's birthday, we visited friends near Munich. It was something unplanned, and we called just one day earlier. Despite the short notice, we were greeted with an incredible German meal and a freshly baked cake. German hospitality.

It may be difficult to make friends in Germany, but once you've formed a bond, it's not easily broken. They're there for the long haul. And if you're really lucky, they'll sing you the song of your life on your 60th birthday.
Posted by Liz Kraft at 11/25/2008 03:33:00 PM