Taboo, or trendy?
I've always been baffled at the way the Dutch use the "F" word. Granted, it has no meaning to them, but I've heard it both on children's programming and from parents of young children... and now I've discovered it on the cover of a mainstream magazine (just under the first bold headline). 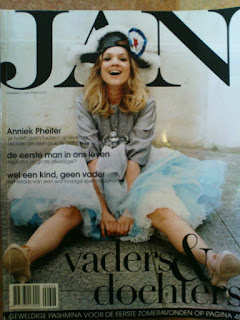 Isn't that crazy? And I can't say that I entirely agree with its casual use (especially by youth!), albeit abroad. If we were to use the dirtiest German word (still not quite sure what the Dutch say) - literally translated to "Dirty Pig" - in daily conversation, I'm sure they'd be less than enthusiastic. And do we really want our kids loosely using explicatives from other languages? I think not.
But it's all quite interesting, nonetheless. Sometimes I feel like I'm the subject in a global socialogy experiment. It's pretty incredible!
Posted by Liz Kraft at 3/25/2009 03:44:00 PM