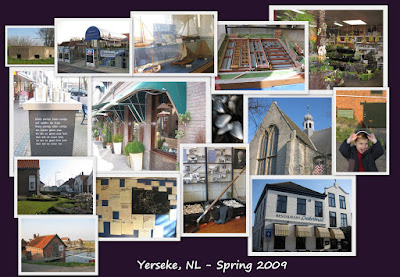 One of the images that remains in my head from yesterday's Yerseke adventure is that of a local middle-aged garbage man, striking a seductive pose against an old brick row-house after spotting me with camera in hand. Had I been bold enough, I'd have a photo to share with you, but instead, I just grinned goofily and shrank off in another direction. Oh well.
Other than that, from a visitor's perspective, Holland's surprisingly calm mussel capital appears to have über-friendly residents.
Following my nose, I wound up in a local bakery, slightly disappointed that I hadn't ended up in a restaurant with outdoor seating. I bought an "Olieboll" (a fried dough ball with raisins) and Fanta, and sat down to observe. People seemed simply ecstatic to see eachother, as if they had had an entire pot of coffee and couldn't contain their excitement. Kind of cute. Across the street at the Visitors' Bureau, I asked why. The volunteer behind the counter, a woman with a broad smile and shortly cut salt-and-pepper hair, said that because Yerseke is an old fishing village, it remains a tightly knit community, with the women looking after eachothers' children while the men are away at sea. But according to her, people are still fairly divided among religious lines (Catholic, Protestant and Reformed).
We switched topics and began talking about the mussels, and she explained that, "Every day they [the mussels] are auctioned off at the Schelde [or harbour], but the times change depending on when the boats come in." When asked if individuals could also take place in the auction she replied with a grin, "Not unless you want a boat-load of mussels".
Posted by Liz Kraft at 3/31/2009 03:01:00 PM