We walked carefully, almost languidly, across uneven fields covered in tall grass. The green rolling hills of the Franconian countryside stretched on for miles before us. Wildflowers adorned 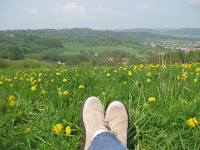 them, and towns with quintessential church steeples were nestled neatly into the nooks and crannies.

We weren't alone. On this day, many families chose to frolic in the meadows, as if in thanks for the 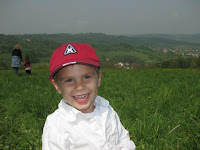 springtime, sunshine, and everything May.

And, American that I am, while I initially wondered why there were never planned children's activities at the annual Neunkirchen am Brand “Wurzhütten-Kerwa” that we attended, it wasn't long before I realized why. While older kids went off on excursions in the nearby forest, little ones rolled around on picnic blankets with parents and other siblings, their giggling faces set against the emerald hills of studio backdrops... only this was the real deal.

As is usually the case, I took lots of photos. One of the scenes that I love best may be considered by some to be a bit controversial. It's just a shot of me sitting in a 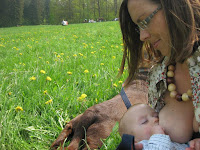 meadow with the dog and baby... but since part of my breast is exposed, some may label it obscene. "Shame!" as the South Africans say, which means "That's too bad!". As a huge advocate of breast-feeding (and mothers being able nurse without feeling awkward or uncomfortable), I decided not to censor it. Afterall, moments like those - no matter where they they are in the world - are amongst the most precious that life has to offer. 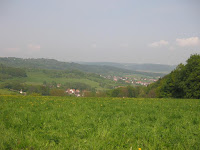 So here's to the journeys of motherhood and parenting... be it in Franconia, Germany; Holland; or your neck of the woods. What better way to celebrate the beautiful, fertile season of Spring? :) 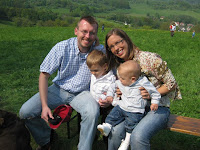