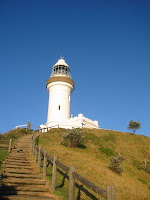 Byron Bay. A bay so beautiful, we named our first born after it (Lukas Byron Kraft). If I had my way, I'd stay there for a week. Somewhere in a quaint little house on the steep hills of the village. I'd walk to the beach every morning, to admire the curious crab constellations (before they're washed away by the sea and beach-combers). I'd have lunch on popular Lawson Street at the artsy Twisted Sister Café, and take a leisurely stroll through town, discovering a new shop or gallery every day. 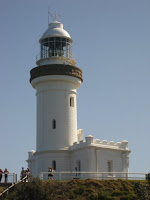 Afternoons would be filled with tandem hang-gliding off the steep cliffs of northern New South Wales or in any combination of surf, kayak, and stand-up paddling lessons (obviously, at this point the children will be away at college). As dusk fell, I'd join the locals for sundowners (BYO!) on the beach near Fishheads (at the intersection of Jonson Street and Bay Street).

I'd time my trip to coincide with the first Sunday of the month, which would put me there for the Craft and Produce Market at the pristine Butler Street Reserve. But if I missed the Butler Street Markets, I'd head out to explore some of the regions' other popular weekend gatherings, such as the Channon or Bungalow Markets.

It would be a magical week, and by it's end, I will have evolved into a proper beach bum. :) 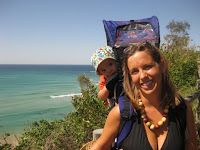 Instead, we settled for a day in Byron Bay. We did manage to have lunch at the Twisted Sista Café, and I hiked from town up to the light house (5km), with Alex in-tow, enjoying many spectacular views along the way. At the top, we spotted a mama humpback whale with her calf and some dolphins.

As for the afternoon, it was spent combing Byron Bay's picturesque beach, searching for remaining cra 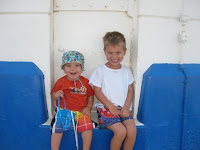 b constellations, and basking in the warm Australian sun. Not long now... in a few days we'd transition from the Aussie Spring to the European Autumn, saying goodbye to one of our very favorite places, and hoping only that we're lucky enough to return some sunny day.
Posted by Liz Kraft at 10/17/2009 07:00:00 AM