"Proudly American" (In the Middle East)

Two days ago I saw a man walking around Dubai with a Tshirt that read "Proudly American". Now, I'm all for being proud of who you are, but is it necessary to flaunt it? The Queen of England is probably pretty proud to be Queen, as is the President of the United States, but something tells me that they don't flaunt it on a Hanes Tshirt when they go to a G8 Summit.

Yes, it's great to be an American. Though there are plenty of people in the world who hate us (there are ignorant, hate-filled people in every country), most people love us, and a heck of a lot of people would do anything just to be in our shoes. In reality, wearing something that says "Proudly American" is like saying, "I'm proud to from a wealthy country where most people afford to eat" or "I'm proud to live in a country that isn't currently slaughtering those protesting." Why go there?

Many people are stuck in situations that they're not proud of. They'd do anything to change their circumstances, but their government or monetary situation doesn't allow for such changes. Does an Iranian Doctor who hasn't been able to get a visa in America but wants desperately to get his family out of harms way really need to see a man walking around in a "Proudly American" Tshirt? Probably not. Be proud, but don't rub salt in the wounds of those that are suffering (and know that they surround us). Especially when traveling, show compassion and be sensitive to the suffering in the world.

Because it's one thing to wear a gold medal around the Olympic Village, but to wear it on the outside or - even worse - to a fellow athlete's home, is the ultimate statement of vanity. And is that really an attractive trait in a nationality? 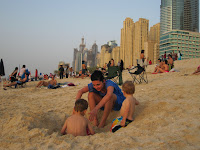 Pictured left: An Iranian college student comes over to play with the children. "So you're American!" she said. She's studying in London and struggling with the decision to go home or stay abroad. How can she best help her fellow Iranians? Things are bad at home, and with so many young people being slaughtered, it's hard to maintain hope.
Posted by Liz Kraft at 3/27/2010 10:49:00 AM

So sensitively and logically put. Memorable and touching blog post. What a contrast in the arogance of that one American and the Iranian college student. It's good to see that there are other Americans that such true representations of the best of our nation (you!).