If you've been following my blog for a while, you know that I generally try to keep it pretty grounded. And when we're traveling, for every wonderfully memorable moment we have, there is a "How-Did-I-Get-Myself-Into-This?" moment to balance it out. Yin and Yang.

Saturday's return flight to Europe was one of the latter. In retrospect, it's so bad that it's funny. Alex threw up all himself and me, soaking his jeans and my own. I realized I hadn't packed any clothes for him, despite me knowing that he had been sick... much less for myself. When I took him in the tiny in-flight bathroom to put the lucky single pair of replacement pants on him - Lukas' little jogging pants - his sweater (which was my only replacement top for him) fell in the toilet. As if that weren't enough, my jacket then fell into the urine puddle on the floor. Later, while I was trying to get some sleep (an hour of the 9-hour nighttime flight), my dress caught on something and tore (remember, I have no pants under it at this point, because they're soaked with throw up). And my glasses broke. No joke. 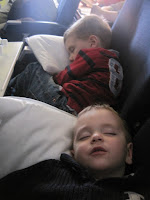 Like I said, that particular leg of our 1-month journey was so bad it was funny. But, almost perversely, we'll do it all again in a heartbeat. Because the truth is that traveling is so very worth it. More often than not, the memorable moments outweigh the bad, exacerbating our unquenchable thirst, and our ever-wandering nature.
Posted by Liz Kraft at 3/10/2010 10:49:00 AM