Dune Bashing (with Kids!) in the Arabian Desert 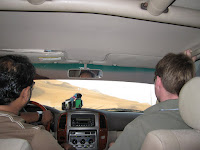 "Mama, he's a really bad driver!" shouted our four-year-old, indignantly. I looked at our guide, half expecting a rebuttal. His back was still turned to us, the word "American" inscribed on his kacky-colored Tshirt, snug fitting across his broad back. The massive weight of the Land Cruiser caused it to drift swiftly down the slippery sand dunes, and my stomach began to churn. 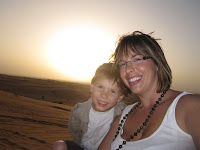 Fortunately, there were several reasons that I could not afford to get carsick. For starters, I had just laughed at a local woman for getting carsick at the very start of her dune bashing expedition. But, more importantly, I knew that Lukas was watching my every move. If Mama is scared, Lukas is scared. So nevermind the bloody head injury that we had just seen a Quad driver incur on these dunes. Or the fact that this was the first Land Cruiser I had ever been in that was equipped with a roll cage. Or the fact that the driver seemed intent on driving on the narrow ridges of the highest dunes; crisp, wind-formed peaks which would have given way beneath my feet (much less the tonage of a massive steel vehicle). None of that mattered. We made a decision to do this and now was our chance to make most of it. 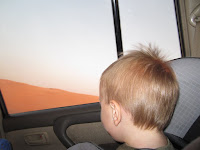 While Lukas was on the verge of tears, begging me to hold his head just a little bit firmer, 19-month-old Alex was cooly licking his orange-flavored popsicle, giggling at the summit of each dune, and countering each attempt to pull him closer with a giant WHACK!.

Day and night. They couldn't be more different.

We arrived at the camp a little shaken up (save for Alex, who probably wanted to have another go), but otherwise unscathed. Camel rides, henna tattoos, belly dancing, and arabic food all awaited us, and the boys took to the cool desert sand like a giant sandbox, pausing only long enough to munch on some lamb kabobs and accompanying Middle Eastern dishes before returning to their digging and sand-relocating schemes.

Beautiful and powdery as it was, the crimson sand of the Rub' al Khali, or "Empty Quarter" got me thinking. Yes it's cool at the surface, but dig your toes a little deeper and you'll find an 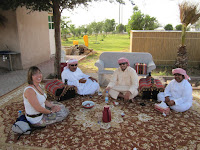 unexpected warmth. The same is true of the locals here in Dubai, several of whom invited me to sit on their carpet and share a cup of their arabic coffee. They don't all hate Americans, nor do they hate women. And if you can get beyond their white and black robes, you'll find many muslims to be some of the nicest people you'll ever come to know. 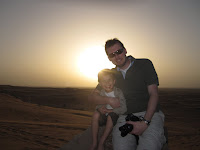 So if you're looking for a way to make your journey (or your life, for that matter!) all the more memorable, try disposing of any preconceived notions or generalizations. Because, as we learned on the dunes, you can either make the most of each experience, or let intollerance and fear consume you. Whether or not your in the drivers' seat -- as my husband likes to say, "Life's all about decisions". Make yours count.
Posted by Liz Kraft at 4/02/2010 08:10:00 PM

My appologies for the silly mispelling of the word "decisions". (previously spelled "decions"). I was writing at midnight. :) If you see any further typos, please let me know!
~Liz