Farms, Castles, and Fortresses - Oh My! 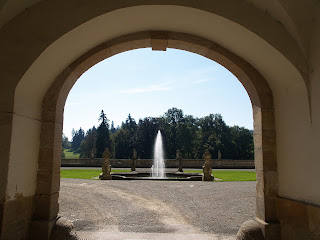 The fountain at the center of the castle's courtyard was still. Only after Lukas' exit from the picturesque arched passageway did an impressive plume of water shoot up into the air, putting a huge double-dimple grin on his 4-year-old face. "Mama, I did that!", he pronounced with pride. 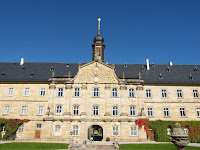 We were at Schloss Tambach for the day, and I had my mother-in-law to thank. It was a pleasant break from our 3-day farm stay (we were staying at the "Steffahof" farm in Northern Franconia), and I was amazed at how much this castle had to offer. Lukas opened an ivey-fringed timber door, only to reveal an unmarked 18th century renaissance-style church. Then, standing at the courtyard's baluster we had a panoramic view of the wildlife park beyond, with it's deer, falconry, and sprawling green parklands. As if that weren't enough -- at the back of the castle we discovered a museum dedicated to the "Hunt and Fishery" (or "Jagd- und Fischerei Museum"), complete with an impressive dinosaur exhibit that the boys adored. 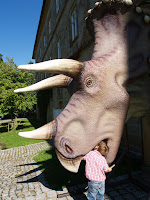 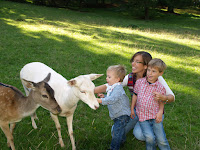 In the wildlife park we fed free-roaming deer, spotted some elk, and watched timidly as bald eagles and vultures soared over our heads, their wing tips grazing the rim of my glasses.
The next day was "my day" to organize, and - with the kids' best interest in mind - I organized absolutely nothing. I let them roam around the farm, playing with cats, kittens, and cows. Just before lunch we headed out on a hike down the winding serpentine road carved into the cool evergreen forest, pausing for a streamside picnic along the way. (Note to self -- and anyone else interested: there is NO food or refreshment available in the town of Wilhelmsthal from 12:30 to 2:30 pm, and no taxi to return you to your guest house, though some locals may be kind enough to offer.)
But the kicker - the absolute icing on the cake - was our last morning, which we spent in Kronach. With its ancient fortress, cobblestone streets, and well-preserved medieval center, it quickly became one of my favorite German cities, and - with a little luck - I'll be back to explore it again someday. 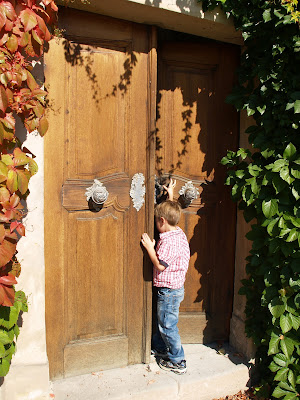