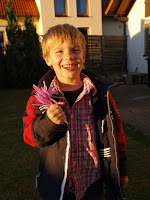 Kids really are like silly putty (remember that stuff? Does it still exist?). They adapt so darned quickly to any given environment.
In the Netherlands our little ones spoke Dutch and proudly wore their little wooden clogs (on occasion). In Dubai, they inquired about certain words in Arabic, the tiny carpets seen in certain corners of some shopping centers, and the practice of praying to mecca. But here in Germany, they're adapting SO quickly, that I find myself learning from then, singing songs like, "Was müssen das für Bäume sein, wo - die - GROße Elefanten spazieren gehen, ohne sich zu Stooooßen" (or in English, "What kind of trees must they be, where the BIII-IIIG elephants go wa-al-king, without bumping intoooo eachother"... sure sounds cuter in German!). 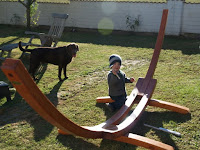 Alex loves to sing Lukas' songs, but doesn't know all the words. This morning he sang his version of Lukas' Elefant song, "La-la-la-la la-la-la-la? la-la-la-la, la-la-la-la la-la-la-la, la-la-la ZU STOSSEN!" And yesterday Alexander (whose language seems to be coming a bit slower than his older brother's at that age), sang another song, emphasizing the word "wunderschön" -- a fairly long word to hear coming out of a two year old's mouth.
And I'm finally happy with our Kindergarten (kindly translated by Lukas just a few weeks back into "Children's Garden" for his American Granny's sake), which is huge! A half year ago, I was worried about the quality of learning provided to the children here in our tiny village (which I thought was virtually non-existent). Meanwhile, Lukas has begun coloring inside of the lines (or at least attempting to), singing new songs ever week (which he really retains, and loves to share with us!), and will occasionally even correct my German.
Plus, the "field trips" are great. Seriously! What fun it is to be a kid in this village, with things like:
So, needless to say, it's quite alright. Okay, it's more than alright! This winter they'll be participating in a St. Martin lamp procession, going sledding, and more. And in the meantime, I've been nominated to the Parent's Board (or "Elternbeirat"). I didn't write my name on the list (thinking I may just watch and focus on getting adjusted this year), but I ended up getting the most votes (what a surprise, the foreigner with the imperfect German!), and am more than happy to help out.


And as for learning, well, I asked Lukas to color on the inside pages of a couple photo albums that we recently created. Surprised at how well he suddenly seemed to be coloring, I complimented him. His response was in German, and he said something to the effect of, "Ja Mama, ich strenge mich jetzt an beim malen! Vorher habe ich mich halt nicht angestrengt, aber jetzt weiss ich dass ich mich ein bisschen anstrengen müß!" -- Rough translation: "Well Mom, I'm concentrating now! Before I didn't, but now I know that I have to apply myself!" How cute is that?!? 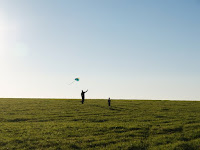 I'm just so proud of them, and I know that Tobi must feel the same. There are still plenty of fights throughout the day, but they're also so affectionate towards one another. There's always a kiss and a hug involved if one of them has to go somewhere. And, last night, Lukas smothered his little brother with kisses at bathtime (which is significant when you consider that this is the time of day when they usually end up inciting eachother to splash, fight, hit, and cry). Alexander's reaction? He feigned disgust, "trying" wildly to keep Lukas at arms' length, his sternest face giving way to laughter.
Yes, being in one place and finally having Papa back really seems to be helping the kids. There's more one-on-one parent time for each child, and they finally know what to expect each day. Life has become predictable for our little nomads. Staying put may be challenging for Mama, but if it's good for them, I'll find a way to make it work for me. Because, at the end of each day I have the same recurring thought, they're so worth it.
Posted by Liz Kraft at 10/19/2010 12:03:00 PM