Skiing the Dolomites, but Missing the States

Strange, when you're homesick, how your country can sometimes haunt you. Here I was, high in the mountains in a gorgeous part of Italy, eating a fabulous Italian meal, when friends proceed to tell me this story:

On a past journey to Montana for snow skiing, they arrived without their luggage and snow gear. After asking around, they determined that there was no place in town if to hire gear. Amazingly, a woman at a concierge desk - an angel in disguise - invited them to her home and lent them her and her husband's personal ski gear - free of charge.

After they relayed the story, they said, 'Could you IMAGINE that ever happening here?!?' Indeed, I couldn't. Which is not to say that people in Germany and surrounds are any less friendly; the idea of "random acts of kindness" just hasn't quite caught on here. Instead, the very same friend has an Aunt in Süd Tirol who cooks a meal for her bachelor brother daily, because of a promise she made to her late mother. And that's probably something you wouldn't see often in the States.

But I always love hearing stories like that from people I meet. Stories of astonishment at how kind Americans can be to total strangers. I have to admit that it gives me a feeling of pride that makes me want to rush home and hug everyone I see. :)

And so began our ski weekend in the Dolomites. Stories of America morphed into a very long journey on a chair lift in the region of Helm, which - in turn - gave me far too much time to contemplate the last time I had gone skiing. "Really? It's been  seven years?" I asked my husband incredulously. Sometimes his good memory is a bad thing.

My mind was racing. Three months pregnant, I ski a maximum of once per year (for a day or two), it's been seven years since the last time, and I've been a maximum of seven times in my entire life. Yikes. And then we arrived. Just put on the friggin' skis. Take a deep breath. And ski one little turn at a time. 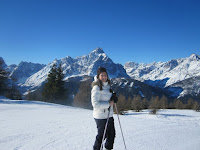 We skied, we ate, we drank, and we skied some more. After 5 hours or so I noticed one of my knees starting to ache in the middle of the day's most challenging slope. I was going too fast, so I turned, and turned, and turned, cutting across the slope horizontally, but building up speed nonetheless. We got to the bottom. I took a deep breath, at which time my husband revealed that the last slope was in fact "black" (black is the most challenging, but this one was an "easy" black). I had skied a black, and I hadn't fallen once all day. I figured it was a good time to throw in the proverbial towel and people-watch with a nice hot cocoa at the nearby hut.
The others continued for another two hours while I enjoyed the sunshine and a good book. When they returned, we tapped our keg of Franconian beer in the parking lot, and with Aprés ski music playing in the background and white-topped mountains peering down at us curiously, we soaked up the last bit of the sun's rays before retiring to a friend's home for homemade Italian Pasta Carbonera.


I walked back to our pension a bit before the rest of the group, along the banks of the Gsieser Stream, piercing the unsettling silence with my footsteps. It seemed as though every star was visible that night, and they dimly illuminated the leaning timber barns that lined the way to our guesthouse. 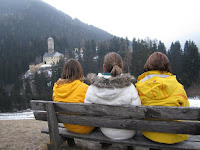 Sunday we found a great spot to admire the castle where our friend Marco's mom had spent most of her childhood. He told us stories of visiting his Grandfather, and how he would get two bottles of hot water to keep him warm while he slept, which he would wake up to find frozen.
Castles and fortresses dotted hills and mountains as we headed over the Brenner Pass, into Austrian. Once in Germany, we stopped at a great little traditional restaurant in the town of Holzkirchen (near Munich) called the Alte Post, where we were served by friendly women in dainty dirndls while indulging in hearty Bavarian dishes.
Some may find five hours' drive to be a bit much for a weekend trip, but the mountains, sunshine, snow, castles, and wonderful company, made it worth every minute.
Posted by Liz Kraft at 3/02/2011 08:23:00 AM