Eating, Praying, and Loving Through America 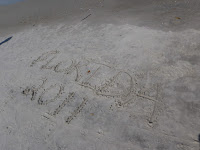 ﻿﻿﻿﻿﻿﻿Like my own personal, traveling-alone-with-two-kids, version of Eat, Pray, Love (by the talented Elizabeth Gilbert) -- our month in the U.S. unfolded like chapters in a book.

﻿﻿﻿﻿﻿﻿Florida, a feast of epic proportions, was not unlike Gilbert's time in Rome,  Every day we ate delicious food, with larger-than-life portions - with most of our quality time with family and friends focused around mealtimes. I played the role of tourist guide to my 5-year-old (and his half-pint brother), and - in between meals with family - took him to such American classics as Wendy's and Panera's. Pure indulgence.
Our long Easter weekend in Tennessee and Georgia were much the same, though with a more southern flair (think BBQ) and a laid-back tempo. The homemade fudge and apple fritters, sold in charming country stores across the South, will haunt me for some time to come in the form of my ever-expanding belly and - later - through the dreaded post-pregnancy give-me-back-my-figure battle. Still, it was worth every, buttery, bite!
Fast forward to Gilbert's India segment - which for us took the form of The New York State and Niagra Falls. It was there that our wonderful host and hostess, Aunt Maureen and Uncle Jim, served as the modern-day-Christian equivalent of the Yogis Gilbert encountered in the Ashram. Everything seems centered around their faith. Heck, we even prayed before meals, at which point Lukas looked at me slightly puzzled, but ever the curious traveler. Their faith reflected in everything, from how they drive to their interraction with total strangers at the grocery store. And, rather than focusing on material things and fancy restaurants, Maureen and Jim were preoccupied with their spirituality, and their do-unto-others-as-you'd-have-done-unto-you mentality certainly left a lasting impression on us.
﻿
﻿

The Vermont and New Hampshire portion of our trip, in which we took a road trip with my Mom and spent several days with my sisters, was not unlike Elizabeth's time in Bali. The part of the old Balinese medicine man was taken by a young American male (who happened to be my sister's landloard until recently). There was no telling sketch, and people did not come to Tim to be healed. But he could not seem to do enough for the total strangers staying at his house, and this mystified me. Picking up fresh-baked goods every morning, volunteerting to entertain my children during my sister's graduation ceremony, doing nothing as his neighbors destructive hens peck their way through his gorgeous garden, sharing his only bathroom with three female guests and two children -- all of this made me wonder what drives his kindness. If not religion, what motivates him to be kind to others? Simple karma, or is it selflessness based on love? I'd guess it was the latter, and since we reap what we sew, and how wonderful that Tim was - and continues to be - determined to sew the seeds of love. ﻿﻿﻿﻿﻿﻿﻿﻿And of course, that my mom and sisters and I could finally be together again certainly reinforced the "love" portion of our journey.
﻿﻿﻿
﻿
﻿

So we ate, prayed, and loved our way through the United States of America (at least the Eastern seaboard portion of it). :) We're thankful to my Aunts, Uncles, Mom, Grandparents, sisters, cousins, and friends for sharing their homes, homemade meals, and lives with us. Though part of me longs to live closer to those that I cherish, I treasure these wonderful, intensive, visits. I consider myself blessed to have the opportunity to be around some of my favorite people in the world for 24-hour segments, sharing them with my children. It's so much better than the alternative - quick meals or short family get-togethers - and makes for incredible, memories. And with just a little luck, this is the stuff that'll get us through the next dark German-winter. Gosh, it looks like the fudge and fritters may come in handy after all. :)
﻿﻿﻿
﻿﻿
﻿

So well written and so many reasons to be thankful! Tim is one of the very kindest people I have ever had the pleasure of knowing.