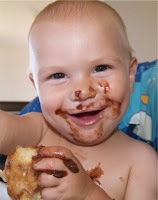 Well, Lukas' first birthday was a big hit! To start with, on his actual birthday, which was last Friday, everything went perfectly. That morning, Rita baked Lukas his very first birthday cake, and we decorated his room with balloons and streamers. He wasn't exactly sure what the occasion was, but he seemed to love all the excitement. Tobi was able to stay home for breakfast, which was really nice. After breakfast Lukas opened some of his presents from Tobi's parents and their friends. That afternoon, I finally got the phone and Internet installed at the new house, the contractor finished our picket fence (so that we didn't have to worry about kids (or dog running off at the party), and a company showed up to clean our windows (which are way to high and difficult for us to do on our own), so I was on cloud 9. I tried to create a presentation for his birthday party, using photos, videos, and some songs I had purchased off of Itunes, but in the end we settled for a photo slideshow, with the music playing separately (which was quite cute!)... a sort of "First Year in Review". Late that evening, after I put Lukas down, I began baking his cake for the following day. It wasn't very difficult, but I find it hard to bake when he's up and about. It was a simple chocolate cake, with chocolate chips and pudding in it, and chocolate frosting on top (which Tobi's father helped me with the following day). A laminated picture of him was in the center, and there were brightly colored chocolate coated candies in the corners. I also made some cupcakes for the kids, vanilla flavored with chocolate frosting on top. I got to bed around 1am, then woke up around 6:30 with a zillion things on my mind. We had to get ready, tidy up the house and decorate before people arrived at Noon. We draped brightly colored fabric in different areas of the house to make it circus-like (and Rita was so helpful!) Five hours went by so quickly, and the first guests showed up a half an hour early. We were pretty much ready, though, and the clown that we hired was early as well. He kept the kids busy with balloons, face painting, and a magic show, and in between we ate cake and opened presents. I had the slide show and music running in the background, and what the kids really enjoyed was when I had them put their hand and foot prints on a specially covered memory board (that I plan to hang in Lukas' room). It really couldn't have gone any better.

Unfortunately, he seems to have caught the rotavirus bug (aka Gastroenteritis). Fortunately for him, I caught it as well, so I don't mind spending lots of time in bed with him at the moment. He has a fairly high fever, and I've been trying to get it down using baby Tylenol, but it's really persistant. And in addition to his gassiness, I think he must have some stomach cramps (I know I do). Poor little guy. And of course he has the signature diarreah that you get with Gastroenteritis.

Yesterday we went to the mall with Oma and Opa. We didn't buy much, but were happy to spend a bit more time with them before they go (tomorrow). Today we just hung around the house, spending most of our time in bed. But Lukas did do something really cute today. He has a little turtle that makes music when you press his belly, so Lukas kept pressing his belly, and when the music would start, he would dance along with it (while sitting). Very cute. And this morning he said "birdy". It was then that I remembered that he's said "birdy" a couple times. I'm going to say that the first time was 3 weeks ago (at the beginning of January). Sometimes I feel like a bad mother for not remembering the EXACT day that he said certain things, but they develop so quickly, it's hard to keep up! Not only that, but if I were to spend more time recording these moments, I wouldn't have as much time to cherish them. And so the part of his baby book where it says "First Words" and "Date", shall remain blank. Oh well.

Hi there! Pretty please leave a little birthday note for Lukas here. We'll make sure he gets them (once he's old enough to appreciate them)! Thanks! :-)

My very dearest Lukas,
I miss you and would have loved to be at your first birthday party! I really enjoyed the pictures of you, especially the ones where you're smiling, as ususal, with a face full of chocolate icing and the one where you're opening your gifts! I hope you know how many people, in different countries, love you! You are always in my thoughts,
Love,
Grandma Moore