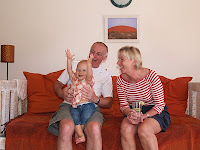 Oh dear, have I fallen off the band wagon. I was so determined to exercise, eat healthy, write regularly, etc, etc. And then life happened. Well, it was actually the dreadful process of moving that got in the way. I know, I know... I said “no more excuses”... but moving is difficult enough as it is, and when you add a baby to the equation, and there’s no professional moving company involved, it becomes significantly more difficult. Oh, and the in-laws have arrived. We’re so happy to have them here, and having people come to stay with us motivated us to unpack everything within a couple days! Despite the stress of the move, I have been doing a bit of walking every day with the dog, and I am proud of myself for getting the new house in order... it looks great, and it’s pretty comfy. Lukas has his own pooh-bear themed room and (although he still sleeps in our room at night) during the day he sleeps in a big-boy bed (he already knows how to get out of bed... by getting on his belly and sliding his feet out).

The last couple weeks have been pretty big for him developmentally. I’ve heard that children get cuter with age, but for some reason, I never really believed it. Well, it’s true! Here’s a quick review of the last week:

Saturday: Tobi’s parents arrived. From the start, he really took to “Oma”, and enjoys Opa as well! (We fired up our indoor grill for the first time and ate ostrich for lunch. Yum! Went to dinner at “The Gannet”... I ate shark.) Lukas was a bit fussy at dinner. He seems to be really gassy lately. Poor little guy.
Sunday: Rita asks Lukas, “Wo ist die Mama?” Und Lukas answers, “Da!” while pointing at me. CUTE! He ate liverwurst for the first time (from Papa, of course). Seemed to like it (yuck!) Later, we spent some time on the beach at “The Point”. There’s a nice little rock pool (or “tide pool”?) down there, where it’s safe for the children to swim, without waves crashing into them (or great whites wandering by). He really loved it. He really has no fear of water! I think he’s going to be a natural swimmer. Afterwards, we had a drink at Delfino’s Lukas was tired, but couldn’t go to sleep with all that action, so he was quite fussy.
Monday: Stood on his own for a few seconds! Mama screamed, with excitement, and tried to get him to repeat it for Oma, but we had no such luck! He also started holding the phone up to his ear... imitating what he sees us doing.
Tuesday: We tried a new “Kindermusik”. It was too slow-paced for Lukas, so the search continues. But it was cute to see him amongst so many children. While they all stayed safely by their Mommies, Lukas immediately ventured out on hands and knees to look at everyone from the center of the circle. In the afternoon, we went on a long walk with Rita and Felix. Lukas fell asleep.
Wednesday: Lukas slept until 8 AM (an hour later than usual)! At breakfast, he began trying to feed himself with a spoon. It’s amazing how much coordination that requires! Later, he refused to take naps (other than a very short one in the morning). Despite his sleepy state, he was pretty good for most of the day. Rita and Walter entertained him for a while, to give Mommy some “me” time. Some of Papa’s colleagues came over for dinner... we had beef and ostrich on the indoor grill. Lukas has begun “throwing” Felix’s toys for him (imitating Mama & Papa). Felix looks kind of bewildered when his toy lands a foot from Lukas, and requires some coaxing to pick it up afterwards (he must be thinking, “Is that seriously the furthest you can throw?”) When Felix grabs it, and Lukas has the other side, Lukas sternly says “Out!” (to which Felix never listens). It’s quite fun to watch them play. They’re going to be great friends in a few years.

Well, now that I've gotten you up-to-date, it's time for us to get ready for our "Top Toddlers" class in George. I'm going to drop Tobi's parents off at the mall beforehand, then meet them afterwards for lunch.