Our Road Trip to Tsitsikamma 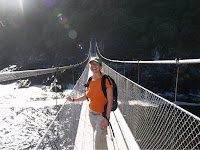 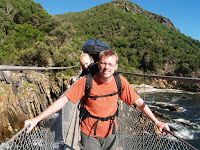 On Friday, I suggested to my husband that we take a road trip (with the baby and dog) to Tsitsikamma National Park, about 226 km (travel distance) from here. With a couple mountain passes and some construction on the National Highway (N2), it normally takes about 4 hours to get there. We decided to leave on Saturday morning, around 9 AM, stopping along the way at the well-known "Wild Oats" farmer's market in a town called Sedgefield. The market was really cute, complete with French music, fresh bread, German sausages, and a big shady area, where you could sit down for lunch. We met a neat young couple from Cape Town, who were also traveling with their canine companions. An hour after we arrived at the market, we piled back into the car and headed towards Tsitsikamma. From Sedgefield, it took us a couple hours to reach our final destination, and it was much more difficult to find our pre-arranged pet-friendly accommodation than we had expected (it was a farm at the end of a rough, dusty, dirt road, 20 minutes from the actual Park).
After dropping off our luggage and the dog, we drove to the National Park, starting at the Restaurant and Information booth, in an effort to get our bearings. There's a nice 45 minute hike originating at the restaurant, and after a quick drink (and some photos... what a spectacular spot!) we packed the baby into his little hiking backpack and began our hike. It's a hike for anyone, really, and after about 20 minutes you reach a suspension bridge which goes out across the gorge (my son's first time crossing a suspension bridge!). It's a nice walk, and afterwards we stopped at the restaurant again, this time for a frosty milkshake. For dinner, we decided to go elsewhere, and drove into Tsitsikamma Village to see what we could find. After driving down the only street in town, we settled on the restaurant at the Protea Hotel, which was quite cute. We were able to eat outside, which meant that Lukas could crawl around a bit on the nice lawn while we were waiting for our meal. The food was great, and so was the service. I wish we could say the same about our son! Oh well.
The next day we had breakfast with our hostess at the Dolphin View accommodation, then headed out on another hike. The well-known Dolphin Trail goes just past the accommodation, but the whole trail takes several days to do, and we only had a few hours. Had we taken enough food and water, and had it not been the baby's nap time, we might have been gone longer than an hour and a half. It was really quite steep, though... and my husband insisted on keeping the baby on his back (poor guy!). Once we got back, we were drenched with sweat, but we quickly packed up and got on the road, stopping halfway at the Waterfront in Knysna for lunch. We ate at a seafood restaurant with horrible service, but good food, and Knysna is really a nice little town (in comparison to Mossel Bay). From there, the my son slept all the way home, which made the trip fairly painless (yay!). All-in-all, we had a great weekend, and we decided that want to try to start a tradition of doing a family hike on Sundays.
Posted by Liz Kraft at 2/05/2007 11:20:00 AM

A leisurely Sunday hike sounds like a fun family tradition!

By the way, I love the new addition of photos...it certainly makes a blog more reader-friendly