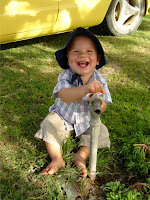 The last couple weeks have been fairly anticlimactic. The weekend before last (March 24th), we took my youngest sister up to the Sedgefield Markets and Knysna Heads (wow! they sure are incredible!), while my other sister prepared for her backpacking trip out to Port Elizabeth. The following day we headed out to Diaz Beach, where we tried to get the baby acclimated to that strange stuff we call sand. He really got a kick out of the beach ball we brought along, and seems to favor his left foot when playing soccer. That Monday I had to drop little sis off at the George airport, as it was time for her to return to the States. We were sad to see her go!

Since we had friends visiting from Germany, we still had plenty of company at home, and lots of help with the baby!

As for the baby's development, two weeks ago (on Tuesday) he begun to use the word "up" quite frequently. It's so neat when they're able to start communicating their wants and needs! The following day he started using the word "apple"... for the fruits AND the juice! On Thursday (March 29th), our little man began to understand what a "pocket" is (I stuffed little finger puppets in his pockets, and later, asked him what was in there... he reached in and pulled the finger puppets out!) The following night he must have been cutting a couple teeth, since he wanted to nurse throughout the night and was pretty fussy. Last Saturday, we went to a farm out near an area called Vleesbaai, where we supposed to be in a music video for a popular Afrikaans musician named Anton. The logistics didn't work out, but it was such a beautiful old farm house, and the setting was nothing short of spectacular (see above photo). A large river ran right through their property, and it was at the foot of the mountains.

Sometime around the weekend, he began to use hand gestures more regularly, putting his palms up, as if to say, "I don't know". He also began saying, "Awwooo?" for "hello" (while holding assorted objects to his head - like a phone).

And that Sunday, the baby began saying "cheers" a lot, while holding his drink up in the air. He also began to look much more stable while walking. He's still only taking 5 or 6 steps at a time, but he's so excited about learning to walk! Also on that day, we took my remaining sister up to Oudtshoorn for an arts festival known as the KKNK. Unfortunately for us, every last details of the festival is in Afrikaans, and all three events that we attempted to attend didn't work out (apparently, in stark contrast to daily life in South Africa, at this festival, punctuality is key, and if you are just one minute late, you can forget about being let in). On the bright side, our return drive through the mountains was quite pleasant, and the baby slept the whole way.

Last Monday (a week ago today), we took my sister to a hip Cuban restaurant here in Mossel Bay, Café Havana. The food was good, but the baby was a bit restless. The following day, I drove my sister to Botlierskop for a game drive, since she hadn't seen any giraffes on her game drive in Addo Elephant Park. She seemed to enjoy the game drive, and Lukas and I enjoyed our time lounging around on the terrace of the restaurant, overlooking the valley and surrounding mountains. We saw our first Knysna Loerie in the tree just next to us - what a beautiful bird!

On Wednesday, I took my sister to a birthday breakfast for a friend of mine. Breakfast was at The Point Hotel. The Point, which is one of the most spectacular spots in Mossel bay, is a type of peninsula, surrounded by jagged rocks, and well-known for it's surfing, and the Khoi Cave (once a dwelling for the Khoi people - it's complemented by ancient cave paintings and lots of rock dassies).

After breakfast, we headed out to the airport once again, this time to drop the last of the family visitors off, just before Easter (how sad is that?). And so we geared up for our Easter weekend in a strange country, without family. But don't fret, it actually turned out to be quite nice! Check out the next entry to learn more!
Posted by Liz Kraft at 4/09/2007 09:40:00 AM