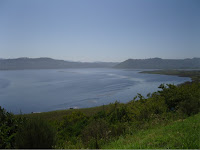 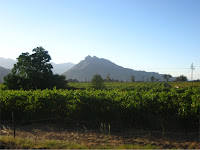 picturesque and historic town which was founded when a small colony of French Huguenot refugees (207 to be exact) arrived on the Cape after fleeing France (du to religious persecution). It is famous both for its many fine restaurants and its wine, and so we stopped for lunch at the Grand Provence vineyards. Here's an excerpt from the winery's website, "Grande Provence Estate wears her 300-year history with dignity. Sitting in the magnificent Franschhoek Valley in South Africa's Western Cape, her lush vines spread across 30 hectares with gentle vistas over the valley floor, at odds almost with the rugged mountains beyond. This is heartland South African wine country." Doesn't that sound exquisite? The food, wine, and service were outstanding, and although the baby was a bit of a handful, we took turns playing on the big, grassy, lawn with him. Lunch was served outside, but we had to walk through the "Jonkershuis" to get to the bathrooms, and the combination of beautiful, rustic furniture, accented by a log fire and a few tasteful modern accents, made it quite eye catching. Just the way I envision our future house to be!
After lunch began the real adventure. For some reason, our navigation system (which we had borrowed from a friend), preferred gravel roads and private property to highways. The setting was "fastest route", but our route would have been more accurately described as "scenic" or "all-terrain". I think she took us on the R45 over the Franschhoek Pass and Theewaterskloof Dam, then a small unmarked dirt road over Vanderstels Pass and onto Caledon. From Caledon we drove through multiple farms on a dirt road leading to Hermanus, but not before stopping at a local farm to get further directions (the farmer looked bewildered to see a motor home on his farm, that just happened to be full of women, all of them foreign... "I better cut back on the cow dung." No, I believe his actual words were, "And this thing told you to drive through my farm?"). Along the way, we spotted antelope, cattle, horses, a tortoise... and the quill of a porcupine! That evening we stayed in Paradise Park... whose name is most misleading.
Friday, March 16
Today was the last day of our road trip, and Mom's last day in South Africa. We started with breakfast at a 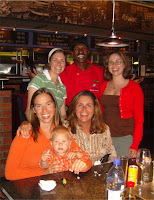 little outdoors café in Hermanus, a bit of souvenir shopping, and some photos. Hermanus is a prime spot for whale watching, but is a pleasant city to visit even outside of whale season. Afterwards, we packed up all of our gear and headed towards Cape Town to turn in the RV.
Our bed and breakfast was in Oranjezicht, a charming little neighborhood close to the city center. After settling in, we headed out to my favorite South African restaurant, the "Cape Town Fish Market". They have outstanding food and service there, and the one we went to is right on the Waterfront, a must-see for Mom on her last evening. We sat in the Teppanyaki section, and our chef, George, kept us well entertained as he prepared our food.
Saturday, March 17
This morning we dropped Mom off at the airport; having breakfast together at a restaurant in the terminal before she left (we were so sad to see her go)! Afterwards, we drove back to the B&B, taking advantage of the "breakfast included" before venturing off into the city. Breakfast was followed by a quick walk around the Oranjezicht, where we discovered a mall and local grocery store.
After taking a short nap we decided to head back down to the Waterfront, but before departing we saw a huge fire on the mountain adjacent to where we were staying. Helicopters and fire engines were doing their best to put it out before it spread to surrounding houses, and once we arrived in the city center, we noticed a red, blinking light on the pedestrian bridge at the Waterfront, indicating that it shouldn't be used during fire. They successfully put the fire out, though, and in the meantime we enjoyed the Waterfront's resident seals, as well as the markets and surrounding shops.
For dinner we went to a Portuguese restaurant near our Bed and Breakfast, which was ok, but nothing to write home about.
Sunday, March 18
After having breakfast at the B&B, the girls headed out to the Cape of Good Hope. The baby and and I opted for a slightly less stressful day, exploring the neighborhood and visiting a nearby café for lunch. Once the girls returned, we met some friends visiting from Germany at the Café Paradiso on trendy Kloof Street.
Monday, March 19
We had our last breakfast at the B&B, and then packed up. Having spotted the "Seattle Coffee Company" on Kloof Street Sunday evening, we decided this was a must-visit location on our last morning in Cape Town. After getting our fix of American-style java "To-Go", we headed to the Kirstenbosch Botanical Gardens for the free 10 AM tour. The Gardens are really quite amazing, and as the only people on the tour, were able to ask lots of questions about South African flowers and fauna. A perfect way to spend our last morning in Cape Town! From there it was onto Mossel Bay, a 4 hour drive through the mountainous Western Cape. Besides ridiculous amounts of construction and partial road-closures, the trip home was fairly uneventful, and we arrived home in time for dinner that night.
And that, my friends, was our exciting family road trip. I hope you enjoyed it as much as we did... it was stressful at times, but we sure did create a lot of memories!
~Liz
Posted by Liz Kraft at 3/28/2007 08:01:00 AM