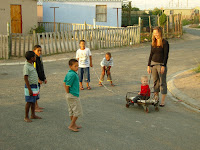 South Africa is an amazing country, and in July, when I watch her for what might be the last time from my plane window, I'll be fighting back the tears.

Having said this, it's also a puzzling country. People here have mixed emotions. Regardless of whether you're in a township or a gated community, you'll see fear and intolerance coupled with hatred and violence, but in that same community you'll see hope and compassion accompanied by solidarity and pride.

My friend Deoni says that there are times when she's ashamed to be an Afrikaner. I find that hard to imagine, since Deoni eats, sleeps, and drinks Afrikaans. Her family and most of her friends are Afrikaans, and she grew up in a very Afrikaans region of South Africa. Why would she be ashamed?

Well, apparently, there's a new cell phone text message going around that's extremely racist and quite frightening. It's a re-write of the South African national anthem, which I'm going to try to track down, translate, and add to this blog. But in addition to these types of messages, there are rumors going around that when Nelson Mandela dies, there will be a mass-slaughtering of all white South Africans. Deoni added, "But most white South Africans have a gun at home, and we won't go down without a fight." The thought of such a massacre sent chills down my spine. We shifted the conversation outside to shaded table under the Milkwood tree, just in front of her Italian-style villa (but inside the compound-like concrete walls).

Deoni's one of the privileged white Afrikaners. Life for most black and brown (AKA "colored") Afrikaners is much different. Last Sunday we were invited for dinner at Rijanah's house for the first time (that's our part-time nanny). Tobi wasn't thrilled about the prospect of having dinner in a township, but I explained to him that this was really an honor. Rijanah trusted us enough to invite us into her home, without fearing that we would ridicule or laugh at their simple way of life.

Picture four adults living in a house the size of a typical American bedroom. There are two twin beds right next to each other, and the room is divided by a cupboard, on the other side of which are the chairs which make up the living room. Unlike some, they do have an indoor toilet. Their sink drains into a bucket (which I found out after pouring left-over wine down the drain). Dinner is usually cooked outside in a "Potjie", a large iron pot (placed on top of a fire). Since it was Rijanah's birthday, and they knew we were joining them, they bought the expensive stuff - Lamb knuckles. They prepared it with a nice gravy, potatoes, and rice.

While we were waiting for dinner, we tried our best to keep Lukas from running into the streets to play with the older kids. A couple times I walked with him, though, and the little (black) boys were very curious about us, the strange (white) visitors. They had a self-made scooter thing, made out of rusty metal, and Lukas insisted on riding on it. The children were mostly very polite, but the adults that walked by were a bit overwhelmed by our presence. Especially the men. There were a couple men that stared at me far too long, turning their neck to continue to stare long after they had passed. In one instance in particular, it was a cruel sort of stare, as if they would rather see me roasting on a spit above the fire. Life in the township can be very hard, so it comes as no surprise that some people are resentful of the "whites".

All-in-all, our township dinner was pleasant, though, and most certainly authentic. In Cape Town, you can pay to do a "township tour" (but I don't think you get to have dinner at someone's house!). What I like best about township-life is that the children still play outside, and they seem happy, despite their simple life. Life goes on.

According to American TV journalist Matt Lauer (who was here last week), the government has everything under control, and townships will be non-existent within a decade. That sounds great in theory, but living here, you get an entirely different impression. Many white people feel threatened. They see "Black Empowerment" as reverse discrimination, resulting in increased crime and future unemployment. Many consider their "national sport", Rugby, to be under attack, thanks to new rules which require teams to pull in minorities, regardless of size and skill differences.

But I have great faith in this country and its people. It just doesn't feel like everyone's ready for change, but my hope is that in a decade, people will be hired and promoted based on skill, not skin color or gender, and that whites and blacks will be seen dining at the same establishments throughout the country (and not just in pockets).

Thanks for sharing this. I love the way you write...I felt as if I were there with you! I'll be back to read more...

Great story about the realities of life in South Africa! Very eye-opening. Makes me feel somewhat proud of the progress we've made in America, although we have have long way to go here, too. I love the picture!