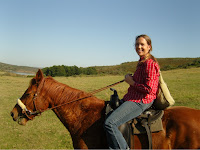 "Cantering is easy, you just sit back in the saddle and relax."
Uh huh, right. How about I just hold on to the saddle with all my might, and let out a high-pitched squeal when I begin to feel out of control?
That's right, I went horseback riding today. My guide, Lucinda, was new to Botlierskop, but she knew a lot about horses & the wildlife. While riding, we spotted rhino, wildebeest, kudu, and elephants, not to mention lots of beautiful fynbos. I really love Botlierskop and have been on many game drives there, but this was definitely different. On horse, not only were we able to get much closer to the plant and animal-life (sans the constant purr of the motor), but we could stop whenever we wanted for photos, or just to admire the incredible view. Plus, it was a 1-on-1 tour, meaning no other tourists would be spoiling the silence with loud chatter in various foreign languages. The 2-hour tour was 400 Rand.

But half of the fun of going out to Botlierskop is, you guessed it, the drive! I think it's one of the prettiest drives out here. It only takes me about 30 minutes to get there, but that's a half an hour of mountains, cattle, pastures, picturesque farm-houses, and little "colored" kids waving as I pass.

But ohhhh, my bum. It's already sore, a mere 4 hours after my return. If it hurts now, just imagine what it's going to feel like tomorrow. C'est la vie!