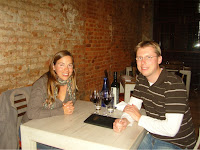 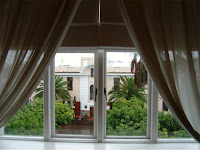 I promised to give you an update on last week's trip to Cape Town, and here it is! To begin with, I've uploaded a few photos of the trip, including a picture of us at dinner at Savoy Cabbage, the view from our hotel room at the Victoria & Alfred Hotel, the Waterfront at dawn, the cozy Coffee & Bites café, and a photo of Nobel Square (just next to the Hotel). 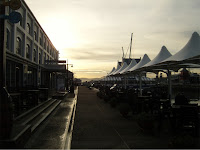 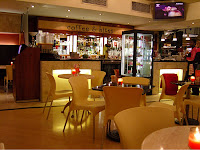 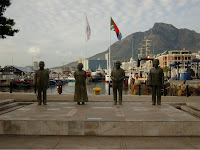 After my last Cape Town posting, we ended up meeting a really neat Aussie mom (and her "tot") at the Waterfront. We had so much in common, which is why Lukas and I decided spur-of-the-moment to join her and her son for a local La Leché meeting (such a neat organization! I hope to get more involved with them in The Netherlands.). After she dropped us back at the Waterfront, we did a bit of shopping (I shopped, Lukas slept - YAY!), then had a coffee at "Coffee & Bites", in the mall.

From there, returned to the hotel, got changed quickly, and got into the taxi to go and meet Tobi in Blauberg. Dinner was at a neat little restaurant, fittingly called "On the Rocks", and although the service was super slow, the food was great (and Lukas was on his best behavior!).

The next morning, we had breakfast at the hotel, overlooking the harbor and Table Mountain, then did a bit of last-minute shopping before heading back to Mossel Bay. The trip was pretty uneventful. I wrote, Lukas slept, and Tobi drove. We arrived in Mossel Bay around 3 PM, and Tobi headed to the office.
Posted by Liz Kraft at 6/17/2007 08:42:00 AM