When Tobi and I were contemplating where we'd like to go for our very last dinner in South Africa, we decided on the restaurant at Botlierskop... where we always brought visitors, and where we've enjoyed so many starry, Garden Route nights. We brought our nanny, Rijanah along, both to thank her, and to have a little extra help with Lukas. It wasn't perfect. The drummers were on leave and the service wasn't as good as usual, but it was still a nice way to wrap up a year that was nothing short of amazing. And halfway through dinner, the song that probably best represents our time in Africa, began to play... Shosholoza. 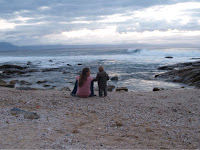 In the morning we drove out to The Point, where we were hoping to get some nice photos of our last sunrise in Mossel Bay. It was overcast, but when we returned to the hotel (which is at the 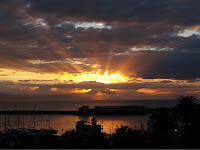 harbor), we realized that it had, in fact, turned into a beautiful sunrise.

Deoni met us at the George airport, and had a big bag of goodies for us. In it was a bag of Karoo olives, which she had painstakingly prepared herself, and a gift. She told me that I must wait until I was on the plane to open it, and I'm very glad that I followed her instructions. I was balling. It was one of the most thoughtful gift I've ever received.

The first item was a little book of Nelson Mandela's favorite children's stories, with a really sweet picture of Deoni's daughter, Rebecca, inside. Now, I have to admit, not only did I buy it for myself a few months back, I also received it as a gift from our friend Marchelle. But what that tells me is that I have two friends in South Africa, who know me very well, and know exactly what I like (even though it was actually meant for Lukas). Now we can have a copy at Grandma & Grandpa's house! :-)

Next to the book was a little hand-crocheted bag, with a parchment scroll attached. The scroll explained that there were several stones and shells inside, each from a different South African coast or region, and her favorite book - Nelson Mandela's Long Walk to Freedom. The book was an old paperback, which was one of the first things that she bought with her first paycheck, when they were still struggling to put food on the table.

All I could think to myself was, will I ever find another friend like Deoni? I get teary-eyed just writing about it. Not only is she such a wonderful, natural, mother, but she's one of the most compassionate people I know, and she loves her country. It's people like her that make South Africa such an incredible place. I'll miss her, our other South African friends, and the country itself, terribly.
Posted by Liz Kraft at 7/08/2007 03:02:00 PM