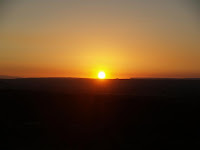 There are certain poignant moments in life that nothing, and I do mean nothing, can prepare you for. As we watched the sun set in the arid, desolate New Mexican hills, accompanied by Grandma, Grandpa, and a cousin, my heart ached for my Grandfather.

It's a spot that holds a lot of memories, and pain. It was here that he used to take his sons to spend time with them, mostly hunting and riding motor bikes. This is also the spot where my father's ashes were scattered 7 years ago. But I wasn't sad about my father. It must be far more painful to lose two sons (my father was the second of three boys to die from unnatural causes - the cousin up there with us lost her father many years earlier), than to lose a father that you barely know... and yet I know how painful it is for me at times. I hope I never have to know his pain.

As he stared stoically towards the sunset, I looked over at him, but dared not cry. The pain that would come to the surface for me would probably be bearable, but for Grandpa, who tries so hard to live in the moment and let go of the hurt, physically grieving is just not an option. And so he keeps it within, and tries his best to live with it - and we all kind of silently acknowledge the shared pain and move on.

Once the sun had disappeared behind Shiprock and the Ute Mountains, we left the hills and traded our SUV for Grandpa's restored Cadillac, heading out to Aztec's ice cream joint - The Vanilla Moose. Sitting there, waiting for my ice cream, I was in a somber mood. I knew that "tomorrow" was the day we'd be packing up to leave, and Lukas wouldn't be able to understand this fully. He just knows that when he says goodbye to people, and has to hug them and give them kisses, it usually means that it'll be a while before he sees them again. And as we all age, saying goodbye only becomes harder. That's one of the not-so-joyful things about travelling, and I can't count on two hands the amount of people I've had to say "Goodbye" to over the past three months. Although I put on my best poker face as we part, I feel so sad inside - every time.

As we drove home with the top down, the 8-track played the John Denver song "Country Road... take me home", and Grandpa sang along. We all looked up at the stars and half-full moon, thankful for life, and especially for the beautiful night, and wonderful week together.
Posted by Liz Kraft at 8/22/2007 12:47:00 PM

Elise, how touching your commentary on George. I'm sorry we missed your visit to NM this year. I hope we'll get to see all of you the next time you are in the states. Sounds like everyone fell in love with Lukas all over again!