Well, I really don't have much to write. It's not that I don't have much going on - we're packing up once again, this time for The Netherlands. But what can I write about packing?

So for now, I'll just get you up-to-date on our week. As I mentioned, our 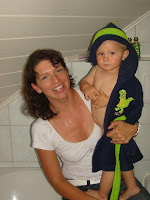 friends Christiane and Gregor came to visit at the beginning of the week. Gregor missed his afternoon nap and was a bit grumpy, but Christiane handled it like a champ and stayed positive throughout the visit. Sleep is so important for these little guys, but they sure do love to fight it (especially when they're anywhere but home)!

While they were visiting we strolled around Nuremberg, stopping for a coffee along the river, had the boys splash around in the bath tub together, and went to the Atlantis "Freizeitbad". 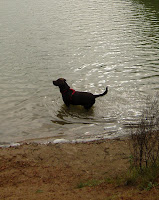 The following day (Wednesday), I took the baby and the dog on an hour's walk, exploring the countryside behind our house. We found the "Baggersee", or man-made lake, and Felix went completely nuts, as usual.

Thursday we headed out to Herzogenaurach with "Oma" to buy some jogging shoes. It's the Adidas mecca, but since we know someone that works at the Nike outlet, that's where we shopped. Afterwards, we visited Rita's friend Dagmar and had a glass of sparkling wine, then headed home for some R&R. 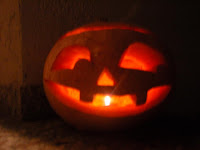 The weather yesterday (Friday) was terrible, but we were able to get out of the house for a bit - visiting our neighbor and her daughter for a little jack-a-lantern-carving craft session. I think it's probably the first jack-a-lantern I've ever carved by myself, so it leaves a lot to be desired... but that's alright :-)

Last night we had salmon at Tobi's parent place, and after dinner we headed home, and they drove to a nearby town to pick up Tobi (who rode down from The Netherlands with a colleague yesterday... but they arrived too late for us to meet them).

And that's pretty much it! Well, except for the water pipe leak that we discovered in our kitchen walls this week. We spent days trying to find the cause, and tore apart the kitchen... and now we can just hope that it was a faulty seal on the dishwasher which we've replaced, and move on.