Don't Laugh, But This is Hillarious! 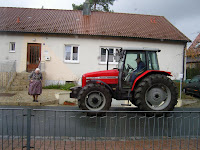 Walking through my in-laws' house today, I noticed something peculiar outside the window. A large red tractor was parked in front of their house, and the driver, an elderly farmer in blue overalls, was dozing in the driver's seat. Since there are no farms directly on their street, I found this peculiar, and took a seat on the couch next to my father-in-law, where I could stare out of the window like a nosy neighbor.

Apparently, this man uses his tractor as his primary means of transportation, and has often been spotted driving his wife to the dentists' office (just across from my in-laws' place). As if that wasn't cute enough, the wife came out in a "tracht", or traditional 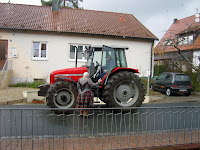 Franconian dress, and you better believe that I got my camera ready. This was something I had often seen, but had never been able to photograph. Perched next to the window with my camera, I was not prepared with what was about to transpire. For some reason, the farmer's wife went around to the back of the tractor, as he climbed down and stood next to the vehicle, perched in the typical male peeing position. "No!" I thought... doubled up in laughter, and (now) hiding beneath the window.

Well, after emptying his bladder in the middle of a residential street, the farmer zipped up, climbed in, and was followed by his sweet little old wife. It wasn't long before they were chugging down the street, side by side, leaving us in their dust to chuckle about the experience, now forever etched in our minds. 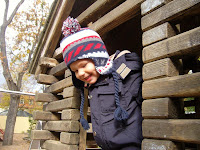 But (fortunately) the day didn't end there. After visiting the gynocologist for my annual check-up (which is, incidentally, oh-so-different here in Germany), 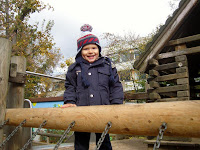 I picked up the baby and headed back to Erlangen, this time to play in the autumn leaves and grab some ice cream at Tom's ice cream parlor ("The Ice House"... which is really a must visit if you're visiting Erlangen!). 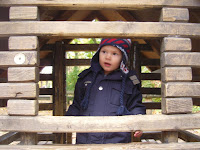 I intended on bringing Lukas to the Schlossgarten, which is absolutely amazing at this time of year, but after playing a bit at the Erlangen "Bohlenplatz" playground it began to drizzle and got very windy, so I decided to save 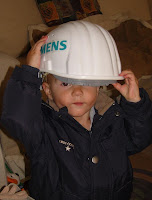 the Schlossgarten for another day.


Arriving home, Marie, Lukas' little friend next door, was waving out of her window, anxious to play with Lukas. It was so cute to have our own little welcoming committee (it's been 3 weeks since they saw eachother). Marie's Mom and I chatted for a bit, while the kids played, 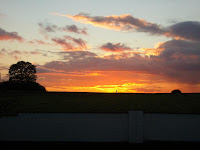 and then we headed home, where Lukas' revelled in Dada's hard hat, and I swooned over yet another beautiful Kleinsendelbach sunset.
Posted by Liz Kraft at 10/18/2007 01:56:00 PM

Very funny story about the tractor!
Love the pics of Lukas, he really has grown!