Through The Eyes of a Child 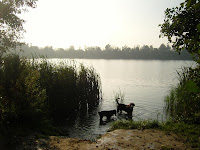 "Ugh, ugh, ugh", Lukas grunted, as he helped me push the stroller up the hill, towards the meadow. After just a few steps, we reached our summit, to which he exclaimed, "Good job!".

But our clever little guy didn't stop at that. When we headed back down the hill (after meeting Tobi and Felix 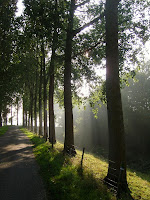 There's no way around it. He's growing up too fast! After horsing around at the lake and the meadow (which reminds me, a horse-drawn carriage passed through the field while we were there!), we walked down the tree-lined street adjacent to the neighborhood, enjoying the surrounding fields, steeples, and windmills, as dusk approached. 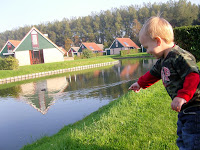 Later, we fed the ducks and watched flying fish from just outside our "house", and I was so happy that I took the time to just do nothing with Lukas. Nothing, that is, but let him be himself, as he ran, jumped, and tried his very hardest to skip. 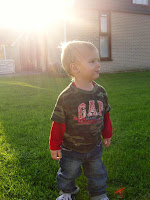 If only we could all be as enthusiastic about those things. How amazing would our lives be if we all nearly fell over with excitement everytime we saw a tractor, excavator, or something as simple as a neighborhood speed bump. Speed bumps, it turns out, can be loads of fun if you run back and forth over them with a 1-and-a-half-year-old, giggling.
:-) Try it sometime!

Backing up a bit, our day began with some brownie-baking and a trip to the Vlissingen "Seafarers Mission", where a group of women from the "WIGZ" (Women's International Group of Zeeland) Organization were meeting for a Harvest Luncheon. There, Lukas developed a fascination with a foozball table, and he and Dada goofed around while I socialized with some of the other families that were there. Another exciting distraction was the mission's guitars, and I love this photo of the two of us playing... 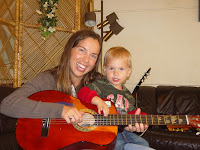 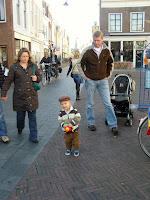 And backing up even further, yesterday we spent a few hours exploring the cobblestone streets of the incredible town of Middelburg, packing in markets, live music performances, and lunch in one of the sunny European squares before calling it a day. Back at home, chef Tobi made fresh lemon-herb fish for dinner. Yum!