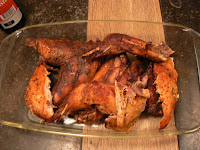 Last night we sat at the dinner table, speculating on what we might, in fact, be eating. Initially, we thought it was pheasant, but we had prepared two distinctly different meats, one that was light and chicken-like, and the other which was dark and game-like. Our landlord and his father had hunted both, and were kind enough to share them with us (Tobi and his parents were determined to try the pheasant - after seeing them run wild here).

But what was truly surreal was to be sitting there with Tobi and his parents, as they bit into the darker, game-like meat, literally chewing over what it could be. Me being one of those silly people that prefers to know what they're about to bite into prior to eating it, I held off, slightly turned off by the pockets of dried blood, usually accompanied by a small pellet-like bullet. Hmmm... how long would I last as a vegetarian?

Well, switching to a (slightly) more pleasant topic, just as we're starting to get settled into a routine, Tobi's parents are packing up, preparing for their trip back to Germany (tomorrow). And to make things just a bit more challenging, Tobi will be out of town for the first couple days of next week. So I'll go from having tons of help, to having, well, no help at all. Granted, it's not for long, and I know we'll do fine, but it's just hard to get settled in when everything's constantly changing.

I'm so grateful, though, for the help that I've had over the past week. Yesterday I was able to attend a little luncheon for the Women's International Group of Zeeland (aka "WIGZ") in Goes, stopping beforehand to check out one of the gyms in town (one of only a few which offer childcare).

The luncheon was great. Most of the women that attended were from Great Britain (maybe some of their "real" English will rub off on me. ;-) , but there were a couple women from Tanzania there as well, which of course got me to talking about South Africa a bit. The luncheon took place at "The Jersey" in Groote Markt (a large market square surrounded by cafés and incredible architecture), which had decent food and service.

Perhaps I can continue to meet up with the WIGZ "Ladies Who Lunch" occasionally (although I would first have to find a pre-school that accepts children under two, and make sure it works for us). That's the next item on my agenda - find a creche/day care that I feel good about, and see how well Lukas adjusts to three whole hours in that wondrous new world. Wish me luck!
Posted by Liz Kraft at 10/30/2007 07:55:00 AM