Tobi really knows how to keep a secret... he's the master of surprises.

Shortly after leaving for work this morning, he returned with a big grin, claiming that he forgot something. By the look on his face, I knew that his parents were standing behind him, and sure enough, suddenly I heard their voices, singing (the German) "Happy Birthday" as they appeared in the doorway with a huge tray of (30) tea candles. What a wonderful surprise! And they brought a gift along... which came all the way from New Mexico (Thank you Grandma & Grandpa!). 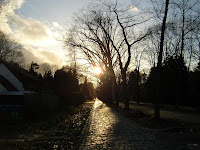 It's turning out to be a very special day, indeed. 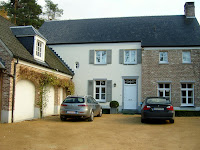 But yesterday was pretty memorable, too. We drove to Belgium, met some friends, and celebrated St. Martin's Day by carving a lantern from a huge turnip (apparently an ancient tradition), and marching around a huge lake, past a huge 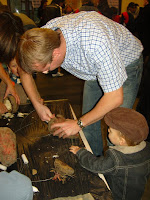 villa, through a castle-like tower, and along a cobblestone street, which circled a field with a single old tree at its center. The sun had long-since set, and we could see our breath, which added an element of adventure to this age-old tradition. People sang and played tambourines during the procession, and at the end there was a man in medieval attire, who sat upon his horse as he told the story of St. Martin in Flemish.