What shall I write about today?
I haven't yet told you about the great time we had at Sunday's Carnival celebrations, so let me start with that. 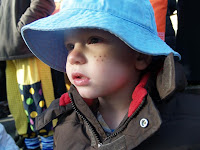 We were invited to a WIGZ gathering at the Seafarers Mission (I've forgotten the official name) in the Vlissingen harbour, which was great. The best part about the get-together wasn't being around dozens of english speakers, or chatting with friends, but to see the smiles on the face of the seamen (stranded there for months, since a huge wave hit their ship, which is now being repaired). These men are away from their families for rediculous amounts of time, and for them to finally feel a sense of normalcy must just be great. Imagine being on the sea for months, and then arriving at a port where you not only have an organization there that accepts and supports you, but they're having a party, and you're invited.

In any case, I love turning holidays and special occasions into altrustic events. And one of the most important lessons I've learned while traveling, is to lose all of your preconceived notions about what's respectable, and what's not. (The ignorance that breeds intollerance and avoidance of those without a "proper" education is both appalling and dangerous.) My husband is one of the most intelligent people I know, and he doesn't have a "College Education".... we have friends that are farmers, and others that are truck drivers.... and the notion of sailors being dirty, horny, or dangerous, is just bogus. Like truckers, most seafarers are family men with an incredibly strong work ethic, that want desperately to get back to their wives and children. Imagine the stories these guys will have on their next trip home! 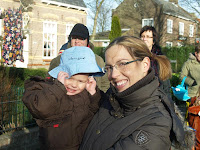 Sunday's Carnival celebrations continued as we joined friends for a parade in "s'Heerenhoek" (pronounced Serenhook). Since Tobi was a bit paraded out from Saturday, it took a bit of convincing before he agreed to go. It was (still) freezing, so we didn't last much more than an hour before retiring into the house of a friend's parents.

But, as one of Zeeland's premier Carnival celebrations (it's only celebrated in the few remaining Catholic towns in this area), there was a definite air of excitement in the streets, and we were glad we didn't miss out on what is apparently one of the region's biggest events. 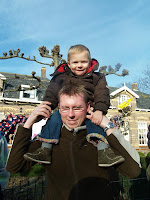 Not being die-hard Carnival goers, to be able to retire into a warm house along the sidelines made Carnival that much nicer for the three of us. Once the parade was over, there was coffee, tea, cake, and open-faced sandwiches, not to mention live music! 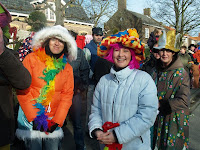 And apparently, the father of our friend Euleine (who's pictured right, in the colorful hat), is a bit of a legend in this region. He has several CDs and sings songs in the regional dialect... and he's so great with the children.

He let them strum along with him while he was playing, and sang children's songs (like the Dutch version of Baa, baa Black Sheep, Have You Any Wool?).

So you see, there's plenty of good to outweigh the bad, and yesterday was (also) a much better day. Lukas went to school (for two hours), and I was able to leave him without a problem, which was huge. Unbelievably, I met a Dutch novelist while dropping Lukas off, whose son is just a year older than Lukas. His wife is a journalist, and they, too, have done their share of traveling, having lived in Sao Paulo, New York City, and Brussels, before settling down here in Oudelande.

After nap time (which we both needed, since a migraine kept me up the night before), I got my grocery shopping done, cleaned up a bit, and even got to watch Dr. Phil (silly, I know, but I always cling to those American programs whilst overseas).

Today's going to be a stay-inside day (with the exception of walking the dog). I'm looking forward to it! 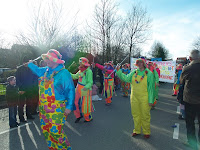