A Small Town "Carneval" in Kwadendamme 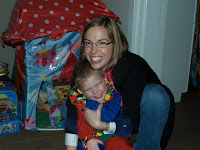 Whewy!
I thought I had seen it all when I visited the everything-goes, innebriated German city of Cologne during Karneval. But imagine a tiny town, 1/100th of the size of Cologne, with a parade just as long, and hundreds of spectators lining the streets, dancing as it passes. What the Kwadendamme parade lacked in costume and float sophistication, it made up for in post-parade hospitality, as we were welcomed into an acquaintance's mother's house for coffee and home-baked cake.

This tiny town of 944 residents (counting the small neighboring community of Langeweegje), with not a single traffic light or gas station, sure does know how to put on a party. A single café / Bar plays host to parade-goers, allowing them to thaw-out after a very cold afternoon on the streets of Kwadendamme. A humongous tent extends from the bar, doubling the capacity of the tiny place, and a DJ plays familiar favorites beside a dance floor growing ever-thicker with people, until alas, it reluctantly reverts to a social platform.

Friends told us it was a great place for the kids, and for the first hour it was, as they danced blissfully together on the dance floor, but the music got progressively louder with each song, and the smoke thickened, until the children, one-by-one, started begging to leave.

That's the one major difference to the Cologne Karneval - the noise factor. In Germany, they have very strict noise ordinances, and an "Ordnungsamt", which enforces the "order". The idea is, you can still have a great party without ear-pearcing explosions (which we heard throughout the small-town parade), deafening music in the bars, and (seemingly) motherless children blowing outragrously loud whistles in an indoor place.

Not a bad concept, eh?

Don't get me wrong, I like music as much as the next guy (or gal), but when you're there with friends, and your only method of communication is to yell in one-another's ears, it's too much.

Amazingly, Dutch children seem immune to the noise. The know Carneval, and they sense their parents' excitement and anticipation as the time approaches. It's all a big party, not just for child-less singles, but for entire families, young and old. Two full days of festivities keep people busy, as the women conspire on which costumes they'll wear on Saturday, vs. Sunday, and lucky moms with parents or in-laws in the area, organize babysitters for the big night(s). Those without family in the area don't generally have a chance. Afterall, the good (or at least 16- and up) babysitters are out celebrating themselves.

But we still had fun, and we won't be battling nausea and headaches at today's parades. Not to mention that old preggers here can't drink anything, anyway! :-) C'est la vie.

To learn more about Carnival celebrations in The Netherlands, and other European countries, check out Wikipedia's posting, at: http://en.wikipedia.org/wiki/Carnival.
Posted by Liz Kraft at 2/03/2008 06:10:00 AM