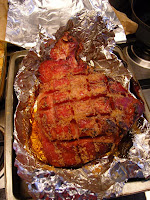 What a spectacular Easter. We had a delicious Easter ham last night, followed by a 3-layer lemon cake, and when I went outside to bring some plants in, I noticed the dog came in with white flakes on his back.

What we get a lot of here is hail, but that you can hear. Could it be snow... in the Spring? With no snowfall all winter, I had my doubts. But there was no mistaking it. It was snowing! Apparently, this was the coldest Easter Zeeland had seen in 45 years! 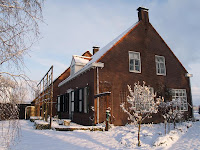 While I brought Lukas upstairs for bed, it continued. From our bedroom window I saw big, thick snow flakes drifting through the air.

It was Lukas' 1st real snow, and he was tickled. I was hopeful that, when we woke 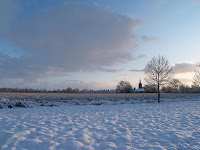 up, the snow would still be there for us to explore.

6:30 AM. My eyes open, and I spring out of bed, towards the window. All I can see is white. My disbelieving eyes follow the icing-caked orchards up to the town's roof tops, continuing on to the white-tipped steeple. I get dressed just as fast as I can, gulp down a bowl of musli, and pull on my galoshes. 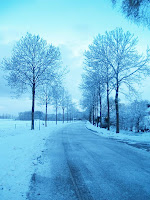 Outside, I walk down the center of a quiet, untouched street, feeling the snow crunch beneath my feet, and turning back to retrace the fresh tracks. A child of the tropics, a goofy, child-like grin crosses my face, and I rush home to get everyone out of bed and then outside - to play in the snow.

After inhaling some Martha-licious maple french toast, we all run out, eager to build snowmen and dance through the white powder. Lukas reacts more like a scientist than his giddy Mama... touching the snow and taking slow steps - then moving in to secure his role in the big snowman-making competition. Then Opa pulls a sled in the barn. Both Lukas and Mama get to ride - but imagine - I'm 30 years old, and today was my first time on a sled! 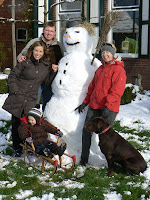 Papa, intent on building world's largest snowman (right smack in the middle of the front yard, of course), was just one of the recipients of Opa's snowman-constructing expertise, while Oma just wanted to have fun. I tried (unsuccessfully) to pull off a snow angel, and Felix excitedly sprung over and around me, nearly landing on my face more than once.

Meanwhile, the geese began to protest loudly, because a new Canadian neighbor (a Canadian goose, that is), quite smitten with the farm, persistently followed them (once again) on their bug-finding rounds. Nearby, Mama hen remained in her little house with baby chick, gratefully pecking away at our daily meal delivery of baby cereal. 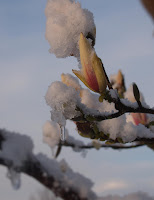 In the afternoon, we received an unexpected visit from our friends (and landloards), their children, and several dogs (they were dog sitting). Six adults, three children, and four snow-covered dogs later, the house was chaotic, but fun, just as a farm house should be, and we talked a bit about the house's history, where "Oma" used to cook, and how, many years ago, every room in the house was converted into sleeping quarters - as the family expanded.

As you can see, it was an unexpected, magical, white Easter, full of many surprises. The kind you'd never dream of, but are forever thankful for. Friends, family, food, farm animals, and lots of much-longed for snow.