Week in Review - From Antwerp to Amsterdam (via Middelburg and Vlissingen)

We had an action-packed week. Antwerp, Wijnegem, Goes, Vlissingen, Middelburg, Domburg, and Keukenhof. You name it, we did it. And considering we had a 2-year old in tow, it's incredible 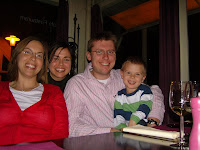 that we were able to cover so much with my sister in the last days of her visit.

To begin with, last Saturday, we brought Jessie to the old Serooskerke windmill [two separate links] for lunch, and then out 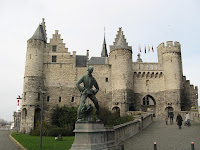 to Antwerp for the day. We made a leisurely afternoon of it, roaming around the old city center, and exploring everything from the "Steen" Castle, a 13th Century medieval fortress on the banks of the Scheldt River, to the "Grote Markt", or City Square, with its grand City Hall (or "Stadhuis"), and the nearby "Butcher's Hall" (or "Vleeshuis").

I love Antwerp... just as soon as I get into its center. It's exterior is ugly and industrial, but that's not uncommon of European cities with large harbors. And traffic can be horrendous. But any negative impressions are quickly erased, replaced by newly formed memories of wagon-worn cobblestone and medieval stone masonry at its best. This is the Europe that many Americans dream of, and long to see. A place where knights, princes, and princesses once roamed, just as the modern-day tourist now can.

Perhaps the week that followed was a bit anticlimactic then. We visited Zeeland's capital, Middelburg, Antwerp's Wij

negen shopping mall, the beaches of Domburg, charming Goes, and the Vlissingen waterfront. Of those, I think Jessie's favorite was probably Middelburg, despite the less than perfect weather that accompanied us on our visit.

But our adventure peaked again just a few hours short of my sister's departure, when exploring Keukenhof Gardens. On the 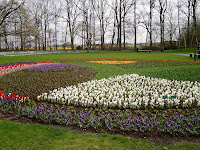 outskirts of Amsterdam in the city of Lisse, Keukenhof is known for its massive fields of tulips. Although they weren't yet blooming, the gardens, officially opened on Tuesday by the Dutch crown Prince, are simply incredible, and the greenhouses full of colorful and rare tulips make amateur photographers 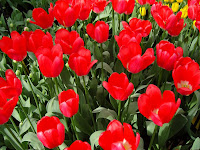 - like me - swear an oath to one day make better photos. Lukas loved the petting zoo, as well as the café's indoor treehouse.... but the restaurant's Disney-like prices inspired me to pack a picnic lunch on my return.

It wasn't long before our three weeks with Jessie had passed, and we were standing at the security point in the Amsterdam Airport, saying our goodbyes. To ensure that we all got emotional, Lukas called out "Love you!" to Jessie as she was turning the corner, after which I promptly carted him away, knowing first-hand how tough it can be to hold back the tears when leaving loved ones.