There have been many times in my life where I have been ill, and have had to decide: To fly, or not to fly?

The thought process is usually - I can sit around at home and feel sorry for myself, or I can get out and have some fun and try to ignore the fact that I'm sick. Sadly, this isn't always possible. 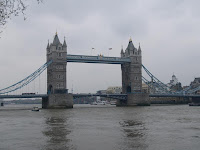 This past weekend, we had to decide whether or not to go to London. Now, having been sick for nearly two months, and not knowing whether it will improve any time in the near future, I opted to go and tough it out. Afterall, this time we were traveling via train, how bad could it be?

On the evening of our arrival, I had a mediabistro.com networking event to attend in Soho, and had arranged a babysitter through Top Notch Nannies. It wasn't cheap, as I had to pay 15 Pounds to the agency, plus 9 Pounds per hour for the sitter, but "Viera" had two children of her own and was a trained doula, so I knew I was leaving Lukas in capable hands for a few hours.

The event was held at the trendy Alphabet Bar on Beak Street, and I enjoyed meeting some new people from the media industry. And as far as the sitter is concerned, everything went so smoothly that I would definitely recommend this agency to anyone traveling to the London area. 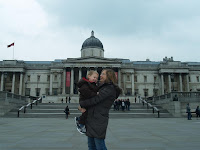 Unfortunately, on the following day, I became so ill that I had to clench my fists every time I wanted to swallow, just to bear the pain. I just remember thinking... "Oh no, I'm going to have to swallow again in a minute." And since I'm pregnant, the only thing I can take for pain is paracetamol (aka Tylenol), which only seems to help in massive doses (1 gram every 5 hours or so).

Desperate, I decided to visit a walk-in clinic, which, in Central London, can be found in Paddington Station or the Oxford Circus area. The doctor was great, but at 70 Pounds (plus the cost of Antibiotics), the bill was steep. 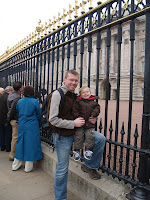 Despite my yucky condition, once Tobi arrived, we did manage to have some fun. Here are some of the high points from the trip:
- Sharing a giant ice cream sunday (gasp!) at Harrod's impressive ice cream parlour
- Watching the "changing of the guard" at Whitehall (slightly less crowded than Buckingham, but presumedly just as interesting),
- Attending the matinee of "Afrika, Afrika" (which seemed to be one of the more child-friendly options with free entry for those under 4) at the Greenwich Peninsula's super impressive O2 Venue
- Visiting some of the quintessential London tourist areas: Trafalgar Square, West End, Tower of London & the Tower Bridge, Green Park, Buckingham Palace, etc.

PARENTS OF YOUNG CHILDREN...
What really surprised me was how difficult it was to get around the tube with a young child. Only a fraction of the "tube" stations have elevators, some have escalators, and nearly all have stairs. Needless to say, when Tobi wasn't there, getting up and down with bags, a stroller and a toddler required no less than Houdini-like skills. From this, I learned that family travel in the city centre is perhaps best accomplished on the city bus or with your little one packed snugly into a child-carrying hiking pack.

Putting all of this non-sense into perspective, though, was the drunken homeless man curled up in the fetal position on Westbourne Grove Sunday morning, his backside completely exposed. People walked by both before and after, as did I. But it felt so cold and thoughtless, so I retraced the 100 meters, then warily pulled his blanket up, protecting both from the cold and passersby. It was the least I could do.

Now, back in Zeeland and 3 days into my Antibiotic treatment, I can only tell you that I'm hopeful that my recovery is on the horizon. My throat hurts less; my cough is deeper and more reflex-like. But sadly, this man will probably never recover - from his pain, shame, alcoholism, or hopelessness. A TV report on the film "Nobody" reminded me of this sad incident.

The truth is, there are people like this all over the world, and yet, I reckon we've never really seen a country until we've seen its backside (pun intended).