Antwerp - Celebration of the Summer 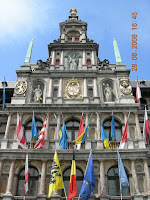 Yesterday, we just happened to be in Antwerp for the Opening of the Summer Celebration, or "Zomer van Antwerpe", in which many of Antwerp's residents get dressed up in Halloween-like costumes and dance around the city (and Lukas, in his beloved American fire-fighting helmet, fit right in). The day's festivities culminate in a parade - followed by a post-parade party, with the result being an almost Carnival-like atmosphere in the center of this most picturesque Belgian city. 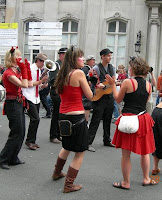 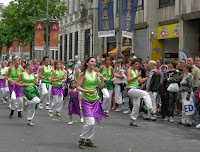 We were there with an Indian friend, Charu, who was visiting from Siemens New Delhi. While Tobi, Charu, and Lukas roamed around the city a bit, I tried out one of Antwerp's better-known spas, Le Boudoir, for a bit of pre-baby pampering and some much needed relaxation. If only it hadn't been so inaccessible by car, and I hadn't had to take a trolley to get there, and I hadn't been rushing to make my appointment, and the appointment hadn't been interrupted three times by spa personnel... then I'm sure it would have been a fantastic experience. But alas, it was not. After my appointment I had to pay over €2 for a cup of tea (after paying over €100 for spa services). Oh well. Such is the price for vanity. I've heard there's a wonderful spa in the Antwerp suburb of Braschaat - maybe next time!
Posted by Liz Kraft at 6/29/2008 08:58:00 AM