My plans for our weekend included either catching the old steam train which runs from Goes to Hoedekenskerke, or taking the boat ride from Middelburg to Veere. Since our timing was off, instead our weekend consisted of:

-A visit to, Emelisse, a popular Zeeuwse brewery in the Nord-Beveland town of Kamperland

-Mosying around the Meiveld park in Middelburg (note to self - both the playground and petting farm open after 1 PM).

-Driving through the 6.6 km Westerschelde Tunnel - to the Southern most part of Zeeland - to visit the city of Hulst, then making a spontaneous stop in Terneuzen to visit the new indoor ski slope.

Here are my thoughts on each of the above Zeeland sights: 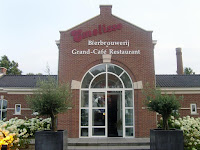 Emelisse Brewery: Expensive, but nice. With most meals running around €20, just a few drinks and a tab for two easily jumps to €100, but the outdoor area is beautifully situated on a grassy field, overlooking the playground area. Great for families! 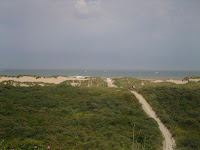 Oranjezon: Is a stunning beach and is well worth visiting. Just be sure to bring everything you'll need for the day, in as compact a form as possible. The walk to the beach is well over 30 minutes, and much of it is unshaded. Be sure to bring lots of drinks and some sun block! 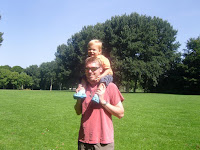 Meiveld: Although we've been there a couple times before during the week, this was the first time that Tobi's joined us. The park is a fantastic place for families wanting to picnic, dogs & their owners, and children. The petting farm is fun, but the (private) playground is one of Zeeland's best, complete with a little snack bar and miniature water park... so don't forget towels for the little ones! 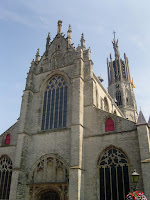 Hulst & "Snow Base" Indoor Ski Slope (Terneuzen): The city of Hulst has it's pretty parts, but overall, it seems to have seen better days. The Zeeland visitor guide makes the tourist destination sound a bit more attractive than it really is (in my eyes, anyway). To make matters worse, we seemed to have chosen bike week to visit, and the motorcycles, and their leather-clad and tattooed owners, gave the city a very distinct, and all-too noisy, flavour. So much for "Tobi, I have a feeling Hulst is going to be one of those cities where we say, 'I can't believe we haven't been here yet!'" D'oh!

As far as the indoor ski slope in Terneuzen is concerned, I have to admit that I'm impressed. It's not inexpensive to ski there, and black-slope-skiers will be bored to no end, but the fact that something like this exists is nothing short of mind boggling. And the ultra-modern lounge/restaurant area naturally offers perfect views of the ski "bunnies", providing a bit of entertainment for non-skiing companions and people who simply wish to ogle.

Goes - The Merral Cinema & Mamma Mia the Movie: Fantastic! After all of our (or should I say my) plans falling apart throughout the weekend, it was nice to end the weekend on such a fun note. Never mind that our rushed, hamburger dinner at home was the event of the year for Oudelande's fly and bee population, or that the meal was made even more enjoyable by Lukas nearly crying over "owa's" in his throat and mouth. Once we were in the theater and the lights were dimmed, all of the weekends mishaps faded away, and it was just us and Hollywood. And Mamma Mia - I can't believe I've never seen it! What a fantastic storyline, and a great way to end a somewhat chaotic weekend.
Posted by Liz Kraft at 7/29/2008 01:48:00 PM

Sounds like you had a full week, albeit not ideal, and that you thoroughly enjoyed Mama Mia at the theatre. The movie was such fun. How did you like Pierce Brosnan's voice? The impressive cast, choregraphy and filming in the Greek village added a true depth to the movie, especially after having seen it on Broadway.