Look Out Zeeland, Here We Come! 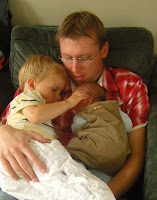 Well, let me begin by saying thanks for the lovely post-natal wishes we've received from friends, family, and fellow blogging mamas. :-)

We named our new little "bundle of joy", born on August 12th here in the Netherlands, Alexander Stephen Kraft.

Alexander is a name that's not terrible when shortened, and works in Germany (where my husband's from), in the U.S. (where I'm from), and in The Netherlands (where we're currently living... in fact all of our Dutch friends are asking whether we've named him after their crown Prince).

Alexander's middle name, Stephen, was the full name of the late Steve Irwin (aka The Crocodile Hunter) who we thought the world of. He devoted his life to an amazing cause, and had an unprecedented enthusiasm for life.

Little Alex is doing well... as is his Mama, but I have to admit that I'm very anxious to start venturing out again (after what I've calculated to be about 166 hours of post-delivery house [ar]rest). Granted, I was granted permission to leave the house for a couple of hours at the end of the week (by my Kraamzorg helper - hello Natasja!), but there were also 2 hours where I felt like a mischievous teenager (yes, again)... sneaking out after her afternoon departure to pick up baby announcements.

In any case, our adventures will certainly soon resume, as I'm dying to take my in-laws to Veere and to some of the beautiful surrounding beaches that they haven't yet seen. And there's so much here that we have yet to explore. So look out Zeeland, here we come!
Posted by Liz Kraft at 8/21/2008 01:43:00 PM