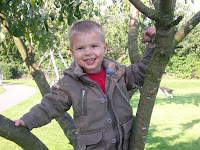 The week has been peaceful -- and we used it to explore some local attractions. Here's a bit of a round-up.

On Sunday, although the sun was shining, the wind was blowing. Wanting to do something special as a family, we hopped in the car and headed out to the Zeeuws Museum in Goes for a culture-filled afternoon. The only catch? Toddlers aren't huge on culture... and no amount of Little Einsteins can make a toddler stay composed for three full floors of art exhibits.

In any case, what I like best at the museum are the "Wonderkamer", a floor full of items bought and traded by the Dutch-India trading companies centuries ago, and the mind-bogglingly large Zeeland tapestries, depicting scenes from the Dutch-Spanish War of the 17th Century.

It wasn't long before Tuesday came around, and I decided to do something fun with Lukas (again). This time, I was certain that he was going to love the "surprise" I had in store for him. We were off to Utropia, which markets itself as a "tropical bird and plant garden". If only tropical birds weren't quite so loud, and we weren't dealing with the world's most sensitive ears. Lukas' entire visit to Utropia was spent walking around with his hands over his ears. Even the rainbow lorikeets couldn't convince him to take his hands down... in fact, they freaked him out further with their sharp nails and over-zealous attempts to drink nectar from our little cup. Oh well. Strike 2.
.
Other events of the week included a visit to the Oudelande playground, where Lukas climbed his first tree (and where I was treated to the click-clack of a "real" Zeelander as he walked by in his traditional wooden clogs!). Even the most boring of days have some element of adventure, and when we're out exploring, there's always something to smile about.
Posted by Liz Kraft at 9/19/2008 02:40:00 PM

Do I sense a bit of lemons being made into lemonade here? :)

You are doing such a great job of getting out with Lukas - I remember how hard it was for me when my second son was born. Even the shortest trip felt challenging those first six months. And when things don't go quite like you planned...

My youngest has very sensitive ears, so I could just picture Lukas with his hands over his ears!

Funny story. Looks like Lukas have his first training for our kookaburras and cockatoos.
How is little Alexander doing?
Love V