A Dutch Christmas - The "Kerstshow^"

On Saturday, rather than rushing into town to get a package in the mail by Noon, I opted for the laid back version of the afternoon on-the-go. We started by exploring the nearby village of Heinkenszand - infant in the Baby Bjorn, dog on the leash, toddler in hand - in search of the annual "Winterfair". It was just me, the boys, and our trusty canine companion, but after wandering around a bit on foot, I discovered that the winterfair was just outside of the village, well beyond where we had parked.

A short car ride later, we arrived at the "fair" -- an indoor, nursery-sponsored "Weihnachtsmarkt" of sorts -- which we quickly walked through, pausing for a freshly fried "Olieboll". These raisin-filled fried dough balls are dusted in powdered sugar and served hot... the perfect answer to frost-bitten fingers.

Once we refueled, it was time to head towards Goes for some errands. And then I saw it. Picture perfect, the lake, along with its charming, sun-drenched, traditional farm house, stood seductively juxtaposed against a forboding sky. I did the unthinkable (had my husband been in the car)... I turned the car around, stopped, and got out for a Kodak moment. 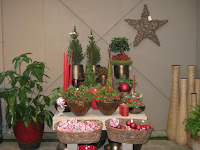 I resumed my journey, but it wasn't long before my foot once again met the break. This time, it was the hand-painted sign for the "Kerstshow" at a charming roadside nursery. Apparently, Christmas is the time of year that these nurseries really shine. Classical music, candlelight, and color-coordinated rooms filled with holiday decorations provided inspiration for every home, and consultants-of-sorts walked around, offering up drinks and hors d'oeuvres. It was holiday bliss, and I had achieved it only by refusing to go anywhere in a hurry, and being utterly spontaneous. 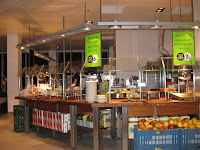 The rest of the afternoon unfolded in a similar manner. We ran a couple errands in Goes (but found nothing that we had hoped for), had a hot chocolate at V&Ds new café, and headed over to "Happy Wok", a restaurant that we had had heard good things about. Again, not wanting to rush to dinner, I first took Lukas into the nearby go-cart hall, which he got a huge kick out of.

That whole little corner of the world you're hanging out in is pretty groovy, IMO. They seem to understand the idea of taking it easy. And making things with powdered sugar. Now that's my kind of place!