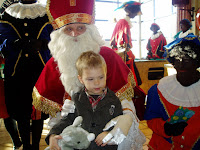 The Dutch adore Sinterklaas, born "Nikolaus von Myra", and commemorate his birthday with Sinterklaas/Pakjesavond on the 5th of December. Nikolaus, a Bishop in the 4th Century in present-day Turkey, is said to be a patron Saint of children. Rather than a fat, jolly, old man, the original Sinterklaas is a tall old man with a kind, wise face and a long white beard, and is always seen wearing his Bischop's costume. He's accompanied by Zwarte Piets, helpers that some say have turned black by going down one to many chimneys.

Having actually met Sinterklaas and his Zwarte Piets in person yesterday, I only have good things to say. Apparently, they were on their way back to Spain, where (according to Dutch legend) they now reside, and stopped 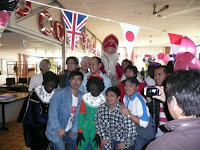 into the Vlissingen Seafarers Mission to bid us all farewell. The Womens International Group of Zeeland, their families, and the temporarilly land-bound seafarers (whose contact with their families this holiday season is limited to letters, emails, and a single Skype call at the Seafarers Mission), were all honored to meet him.

A couple weeks before his birthday, Dutch children place a shoe near the fireplace filled with goodies for Sinterklaas and his white horse, and are rewarded with candy and "Pepernoten" (bite-sized gingerbread-like morsels) in exchange. On the evening of December 5th (or morning of December 6th for some), Sinterklaas knocks on the door and runs, leaving a big present-filled sack at the door. From games, toys, and dolls to a solid chocolate letter, chololate coins, and more pepernoten, Sinterklaas is more than generous when he visits Holland's sweet little boys and girls. Gifts are often accompanied by poems... which I think is a wonderful, thoughtful touch to gift-giving.

As this is likely our last December here in the Netherlands (we'll probably be gone by September), I'll miss Sinterklaas. But what I'll miss even more are the sweet voices of the children, singing songs in his name with pepernoten-scented breath, as well as the smiles on their innocent, chocolate-smeared faces. It's one of those things that's hard to witness when visiting. You really have to live here. Which is why we count ourselves as lucky. :-)