A (Much Anticipated) Zeeland Christmas 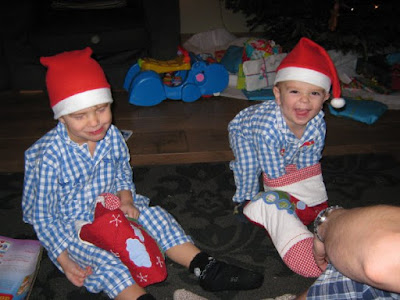 It may have well been the season's most memorable gift. In a stroke of Yuletide magic, on the Eve - and two days - of Christmas, our usual full-winter flu granted us a short respite. And though the thick blanket of snow thinned considerably with each passing day, this Christmas was still a memorable one.

For one, the boys are thrilled that my sister is visiting, as are Tobi and I. Plus, with her she brought gifts from the States - none of which we could have possibly lived without. ;)

Having made the decision to leave our our ornaments packed up in their respective boxes in Germany, most of our decorations were borrowed. Our tree may have been a bit bare, but it was grown right here in Oudelande... so it fits perfectly right here in our little farm house. 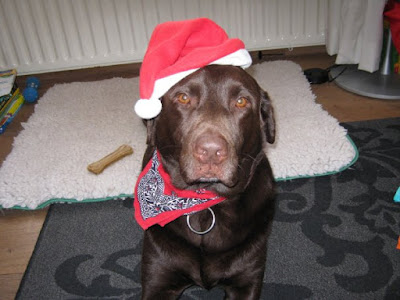 And what did we do? Honestly? I came down at 5am to wrap some gifts, fill stockings, and clean up (to prevent our mess from being captured on photos for eternity). Why? Because around here, everything is done at the absolute last minute. Two hours later I heard the pitter patter of little footsteps, and shortly thereafter we began with our Christmas stockings. The plan was to check out what Santa brought, then get dressed and head over to the church to see our friends perform. Had we known that they lock the doors at exactly 10 am, we wouldn't have arrived at 10:01. I kid you not, they were LOCKED!

And what a sight we were. The silly foreigners, standing at the old church, banging on the doors, only to sadly return to the car in the wind and rain... as we contemplated our tardiness and the fact that we likely missed our last opportunity to see the town's Christmas pageant.

It would have been easy to be grumpy all day. Instead, I took the dog on a walk in spite of the dismal weather; letting my wind-battered ears burn as punishment for my momentary lapse in judgement. I ordered myself to make the best of the situation and not ruin Christmas for my visiting sister or kids. I could have just opened the incredibly cute Christmas card from my family back home. That would have cheered me up quickly!!! 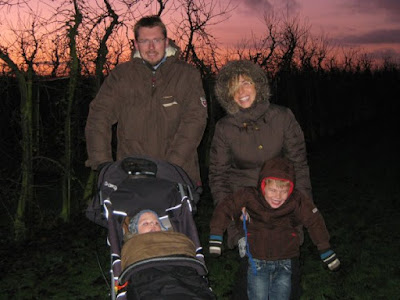 But really, what it boils down to is this: Once upon a time, I was a traveler that needed everything to go exactly as planned for good times to be had. With kids that never happens. You make lemonade from lemons, or let the lemons rot, and - along with them - your whole travel experience. It's all about choices. I chose to be late, and now it was time to re-assess what was important, and how I wanted the rest of the day to unfold. Doesn't get any simpler than that! 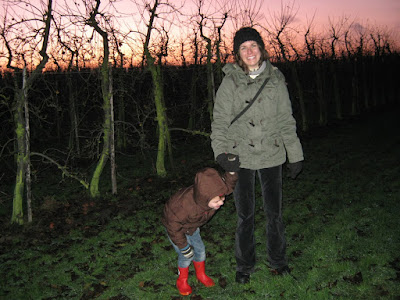 So we opened presents. We had coffee and cake with friends. We presented Peter (the man who grew up on our farm) with a photo album full of dozens of images from our two and a half years on this incredible little farm. We went on a walk through the orchards at sunset. We made a fire. And we ate ostrich stew.


Our second Christmas Day (there are two here in The Netherlands) was the more traditional of the two. Our friends Carrie and Jason came over for dinner and we had turkey and ham (courtesy of Tobi), roasted butternut squash and cranberry sauce from scratch (made by my sister), sweet potato casserole (my creation), and homemade chocolate chip cookies (which Carrie brought along with her, made from imported chocolate chips!). Somehow it felt like we were "home", as we shared in typical American dishes, and traded stories of past and future travels.

On an interesting sidenote, earlier this month a letter of mine appeared in the town's newspaper. In it, I shared with the people of Oudelande how fond we have grown of this place. So we managed to get locked out of the church on Christmas Day. That doesn't change the fact that this has been a very special Christmas for us, here on the "boerderij". A (belated) "Vrolijke Kerst" to you, whether you're here in Zeeland, or somewhere else on this great planet!
Posted by Liz Kraft at 12/27/2009 08:45:00 AM