It takes a lot to shock me. Years of exposure have desensitized me, be it from:
...time spent nude in European saunas
...the crime, drugs, guns and death penalty of the United States
...the extreme poverty and gruesome crimes of South Africa
...the mind-boggling traffic fines of The Netherlands, perhaps best described as making you want to hurt someone - preferrably the unreasonable, unwaivering, money-hungry ape that issued the citation - badly
...and last, but not least, the many miles of nothingness one encounters when stranded pregnant on Australia's "Plenty Highway" (which neither offered "Plenty" or a "Highway").

Having said that, I think it is only fair to tell you that my first exposure to the Bavarian celebration of "Perchten" FREAKED - ME - OUT. Don't misunderstand me. It can be very unnerving to negotiate your way around a German sauna with foreign objects dangling precariously from their foreign owners. But this was different. The masks. the music. The weirdo that sandwiched me between him and a brick wall. 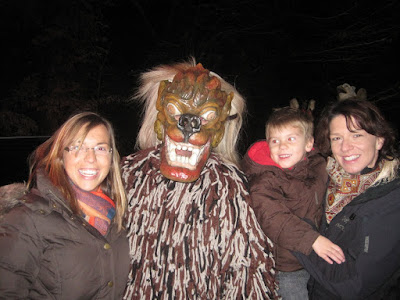 Yes, part of me said, "Hey, how cool that traditions like this exist in such a tiny little town in the middle of nowhere." while the other part of me said, "Wow, this is the perfect holiday for creeps and sexual predators. Where else can you casually molest total strangers without them being able to see your face or object?" Because, after all, it's all in the name of scaring off the "evil spirits". So I guess the phillosophy is "Let's dress in the scariest costumes imaginable, make a lot of noise, and try our very best to scare the bejeebies out of anyone we pass, to keep evil at bay." I suppose these sorts of celebrations led to our American Halloween. But, then again, I did always tend to forgo the "tricks" in favor of the "treats" ("Trick or treat!").

See for yourself. Come along... be my virtual guest at this Perchten celebration in the Bavarian town of Kirchsseon (via the below video).

Thank you to our friends Christiane and Volker for sharing this scary, and yet very cool, little piece of Bavaria with me. I love that Lukas and I were most likely the only foreigners joining in the festivities that night (and thankfully Alex was fast asleep)! :)


Oh, and a gentle reminder for those of you who haven't yet entered for the chance to win one of many cool prizes through Passports with Purpose, there's only five days left! So far we've raised over $19,000, meaning the new school WILL be built, and all additional monies raised go towards creating drinkable water and a vegetable garden for the children. Water and food... things that we give our children every day and perhaps take for granted.

Lastly, I'll leave you with this image of Bavaria in the snow. This was taken on a picturesque country road just south of Munich on Sunday afternoon. As fun as it was for us, it was also Alexander's first real exposure to snow, and he loved it! It evoked images of Narnia and it gave our spontaneous Sunday adventure a frosty winter touch. 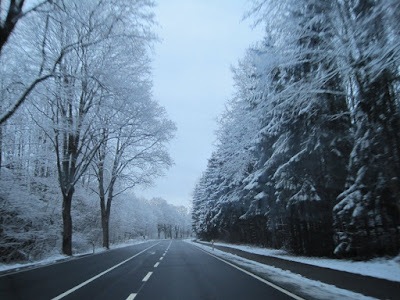 Yes, but could you send me the link to the posting when it's complete? Thanks you, and thanks for visiting my blog!

I was randomly searching for info on Perchten and happened across your post. And then ended up reading the whole first page of your blog :) Just wanted to say how much I liked it!

Cheers,
Urmi
(An Australian via Seattle via Munich.)