For months she racked her brain, searching for something meaningful to write about the place. Two and a half years had passed since she called Oudelande home, and she had met a great 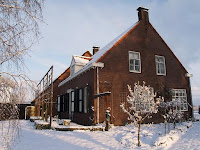 many kind people, and seen countless incredible places and things along the way.

The house had inspired her a great many times. Though it was not old for Dutch standards, it certainly was grand, and what it lacked in age it made up for in character, largely in the form of it's rambling old brick barn, its roof characteristically thatched, air thick with the scent of horses.

But the time would come for her to leave the house, this she knew. And there would certainly be tears.

When a mere week remained, they stood at the countertop in silence, each with a knife in hand; rabbit juices dripping from their fingers. Meticulously, they cut deeper into the hare (which he had 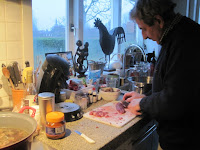 hunted in neighboring fields), and as she considered which meat to use for the stew and which to save for the dog, he puzzled at the size - and contents - of the dog's pile. Looking out to the grazing pastures and berry bushes, she thought of the task at hand, and how farm life had changed her. They'd almost certainly miss eachother, but what sense did it make to talk about it?

By all accounts, their friendship was an unlikely one. She was half his age, lazy by his standards, and made no effort to speak his language. He was twice her age, fed her dog too many hunting scraps, and appeared at the house nearly every day, invited or not.

Every day they exchanged smiles through the old, oversized windows of the farm house. And she grew quite fond of him. The reasons were many - she missed her Grandfather and had never really had a father - but that was all irrelevant. 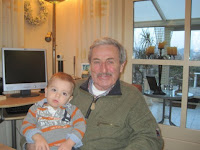 Years were reduced to months, months to days, and days to hours. Goodbyes were always painfully emotional, and she dreaded leaving.

He saw that she was sad and hated it, just as he would the sadness in his own daughter's eyes. She tried to tell herself that she was so very lucky to have had time on the farm, a life in that house, and a landlord that would become a dear friend. And she was.

So she sat on the bathroom floor, awkwardly, writing about the emotions that had begun to overcome her, and once again they passed, like the ebb and flow of the tide. At last, she could focus on the task at hand -- packing all that had accumulated - all that had made her life so comfortable - over the past two years. Her final day in Zeeland lay ahead of her; she'd need all of her strength just to get through it.

She mused that perhaps Donna Hedges said it best when she wrote, "Having a place to go - is a home. Having someone to love - is a family."

This brought tears to my eyes...at work. My heart hurts with you.

Groetjes, Enno and I loved seeing your farm and you so at home there. We will miss you. April 15th we return to Zeeland. I hope we can see you again, maybe drive to Germany. Wishing you all the best on your new journey. I'll never forget the day we met at the molen.