Meet me at the "Berch" - A Traditional Bavarian Beer Festival 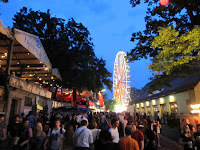 It was our "date night" at the Erlangen Bergkirchweih and Tobi and I would meet a couple people, drink a beer, and get swept along the floor of the beer festival like two fish in a current before running into a few more friends. Along the way, the occasional man (or woman) would steal a glance at my German-style bustier, while other times I swear they were certain that I was a foreigner dressed in traditional clothes. "Is it that obvious?", I wondered. 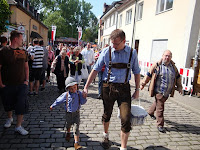 Yes, I wore a "dirndl" and Tobi wore his "lederhosen". And the truth is, it doesn't matter that I'm a foreigner. Let's just say that it's the equivalent of a non-American wearing red, white, and blue on the fourth of July. The more the merrier, right? :) 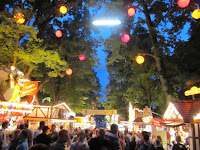 e 1-liter krugs), listened to plenty of great cover bands, met friends, ate greasy Franconian food, and just enjoyed the general ambiance of the "Berch". Afterall, Oktoberfest may be wild and famous, but only the Bergkirchweih and the nearby "Annafest" take place on a hill at the center of a beautiful old city, dotted with cave-like beer cellars that are hundreds of years old, and complete with wooden tables and benches placed - not solely in tents - but also in the open air, set amongst hundreds of old chestnut trees. The German biergarten in all its glory.

Perhaps our Dutch friends Angie and Harold said it best when they described the Erlangen Bergkirchweih as "gezellig". I don't think that there's a good word for this in either the German or English language. You can only imagine...

So grab your dirndl's and lederhosen, and if you want to go all-out pack a picnic lunch - or German "Brotzeit" - complete with your favorite little table cloth. Then - you guessed it - meet me down at the "Berch". Here in Erlangen, that's the place to be for 11-days of the year, and I wouldn't have it any other way. Prost!
Posted by Liz Kraft at 5/26/2010 10:48:00 PM