I love people, and I've found that there's no better way to get to know the people of a country than through its small towns. From Chinchilla, Australia, with it´s sweet semi-annual melon festival, to Bhaktapur, Nepal, with it's far-reaching rice fields, people in the countryside tend to be passionate about the place that they call home and share it proudly with foreigners who care enough to stop. 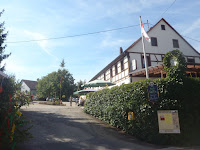 Here in the Upper Franconia region of Germany, things are no different, and today was a perfect example of my absoulte perfect outing. We hiked from our house, through the forest and over the hills, stopping in a large green pasture for a picnic.

Then, at a traditional German "Kirchweih" in the nearby village of Schellenberg, new friends were made. A traditional Franconian farmer made space for us at his table, and - indeed - there turned out to be far more to him than met the eye. How so? He spoke English and Spanish (both self-taught), and is considering selling his farm and relocating to Bolivia (he's already been there three times). After just an hour of exchanging stories and several "Prosts", we received an invitation to visit him at his farm home - a well restored sandstone-house heated only by an old wood burning oven - in the sleepy village of Tauchersreuth. 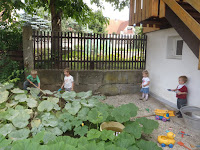 Next on the agenda, we stopped to visit a friend at her 15th century farm house here in Kleinsendelbach, letting the kids play around in the pumpkin patch and ride atop toy tractors. I'll be the first to admit that nothing's ever perfect, and we certainly had a tough time convincing the kids to leave this children't paradise to hike the rest of the home, but I suppose that that's to be expected! (I also ended up carrying Alexander on my shoulders for a portion of the walk, which - though it's less than ideal - is the nature of hiking with small children!) 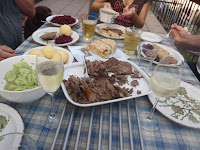 A couple hours later we met our perfect ending. We enjoyed a home-cooked meal beneath rows of climbing hops at my in-laws place -- a traditional German pork roast with red-cabbage kraut and giant round potato dumplings. The aroma, which seeps out of the house and around the corner for all to envy, can be found in many German households on any given Sunday afternoon, and is enough to make my mouth water.

On days like this I rediscover what I love about Franconia, and why I've chosen to make this place home. And though outings with children always present their challenges, today we were all very much in our element, so the "small stuff" (i.e. the wasp that flew right down my shirt) was quickly forgotten. Thank you to farmer "Ziegler's Werner" and the tiny community of Schellenberg for making our afternoon a most intriguing one. Prost! 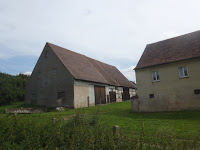 Want to recreate this hike? Head to the village of Kleinsendelbach. Once you're there, turn off of Erlangerstrasse, onto Kellerweg. Park at the end of Kellerweg, at the start of the forest. Follow the forest path for about 5-10 minutes, until it leads to a clearing. Pass the hunting stand built into the apple tree, continuing on along the foot path for another 15 minutes to the village of Schellenberg. In Schellenberg, follow the street as it winds down into the town center. Once you reach "Bergstrasse" be on the lookout for the "Gasthaus zum Schellenberg". If the weather's good you can enjoy a beer or "Radler" (a refreshing beer-lemonade mix) in the restaurant's biergarten, and on Wednesday evenings you can enjoy live performances by local musicians. To return to Kleinsendelbach follow the Bergstrasse downhill, walking through a thick forest canopy along the "Schellenbergstrasse" until you reach the chapel. Pass the chapel and several historic old farmsteads-"hofs", continuing along until you once again see the start of Kellerweg. I think you'll find this to be a terrific hike. Be sure to bring plenty of snacks and drinks, as small family-run restaurants in the German countryside have been known to have odd hours. Enjoy!
Posted by Liz Kraft at 9/12/2010 10:17:00 PM